The Rosacea is a chronic skin condition that is manifested by redness on the cheeks, nose and forehead and chin. As the disease progresses, these rednesses become permanent, small dilated vessels (telangiectasia or rosacea) appear on the cheeks and the wings of the nose, as well as small red pimples (papules).

Rosacea usually begins around the age of 30 and affects mostly people with fair skin and eyes and a tendency to blush easily.

It is a condition that gets worse over the years, especially if it is not treated well. In many people, the symptoms evolve cyclically, with worsening periods alternating with periods of remission. The rosacea can affect anyone aged 20 to 70, but adults from 30 years to 50 years, with the clear complexion and whose skin has a tendency to blush easily are more often affected. From 3% to 10% of the population would be affected by rosacea, to varying degrees. In Canada, more than 2 million people suffer from rosacea.

Women are more prone to rosacea than men, the latter being more inclined to develop rhinophyma, which is characterized by a red, swollen, bumpy nose. This is a very advanced stage of the disease.

The causes are unknown, but according to research , rosacea could be attributed to:

Contrary to popular belief, alcoholism is not the cause of rosacea, although even moderate drinking can make it worse.

Certain diseases affecting the skin, such as lupus or scleroderma, may be accompanied by skin lesions similar to those of rosacea (telangiectasia, redness). It is therefore essential to consult a doctor to confirm the diagnosis.

Finally, the continual application on the face of cortisone cream can cause skin lesions that are visually identical to those of rosacea. In this case, it is rosacea induced by corticosteroid therapy and must be discontinued.

Rosacea evolves differently from person to person. Four subtypes were established 2, which were previously considered as the different phases of the disease. However, the disease never progresses to the highest stage in many people and most patients have a combination of subtypes. It is therefore impossible to predict the course of the disease. 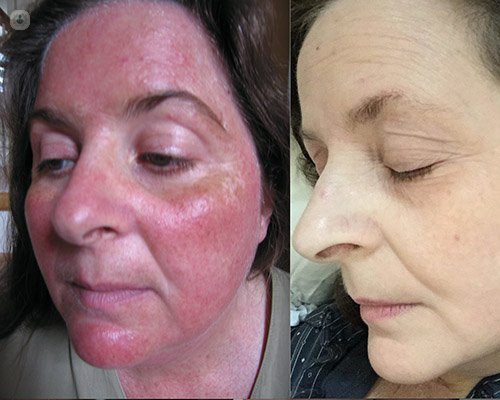 People at risk for Rosacea

The exact origin of rosacea remains unknown, but it is known that various factors may aggravate it or contribute to outbreaks of rosacea. This is particularly the case when:

The Rosacea is a chronic disease. Various treatments generally improve the appearance of the skin, or at least slow down the evolution of symptoms. However, several weeks are often necessary before observing a result and no treatment makes it possible to obtain a total and lasting remission. Thus, the treatments do not act on telangiectasias (dilated vessels) and the redness on the cheeks and the nose never disappears completely. However, it is essential to consult a dermatologist as soon as the first symptoms appear, since the treatments are more effective when used at the early stage of the disease.

Treatment varies according to the stage of the disease and the intensity of the symptoms. It can be very effective, but you should know that in most cases, rosacea worsens after stopping treatment. Usually, almost continuous processing is necessary to maintain a satisfactory result.

Antibiotics. The most commonly prescribed treatment for rosacea is an antibiotic cream to be applied to the skin, based on metronidazole (Metrogel, Rosasol in Canada, Rozex, Rozacrème … in France). Clindamycin creams can also be used. When rosacea is extensive or associated with inflammation of the eyes, the doctor may order an oral antibiotic (tetracycline or sometimes minocycline in Canada) for three months. Although rosacea is not directly linked to bacteria, antibiotics help reduce inflammation of the skin.

Azelaic acid. When applied to the skin as a cream or gel, azelaic acid (Finacea) helps reduce the number of pustules and reduce redness. However, this product is quite irritating for the skin, so you must use a moisturizer adapted to complement.

Oral isotretinoin Accutane in Canada is sometimes used in low doses to treat severe forms of rosacea (in case of phymatous rosacea or papules, pustules or nodules that are resistant to other treatments). As it causes serious side effects, it is prescribed under close medical supervision. Thus, it increases the risk of congenital malformations if used during pregnancy. Women of childbearing age who receive this treatment should be provided with effective contraception and regular pregnancy tests to ensure that they are not pregnant. It is advisable to check with your doctor.

To reduce redness and reduce the appearance of telangiectasia (small red lines following dilation of the vessels) or rhinophyma, various surgical treatments exist.

Electrocoagulation. This is an effective technique on telangiectasia (rosacea) that may require several sessions and has various disadvantages, including: slight bleeding, redness and the formation of small crusts in the following days, a risk of scarring or permanent depigmentation of the skin. This treatment cannot be considered during the summer (risk of formation of brown spots).

Laser surgery. More effective and less painful than electrocoagulation, the laser generally leaves fewer scars. However, it may cause some bruising or temporary redness. It takes from one to three sessions per zone to be treated.

Dermabrasion. This procedure consists in “using” the superficial layer of the skin using a small brush with rapid rotation.