The Sjögren-Sjögren syndrome (pronounced sjeu-greunne), which is part of the dry syndromes, is a chronic condition of autoimmune origin , that is to say related to a reaction of the immune system against certain constituents of the organism , in this case the exocrine glands, secreting fluids in the skin or mucous membranes.

Its manifestations are related to the infiltration of certain glands by lymphocytes causing the decrease of their secretions. The salivary glands of the mouth and the lacrimal glands are the most commonly affected, responsible for a “dry syndrome”. You can also observe a decrease in sweat, sebum but also infiltration and inflammation in other organs such as the lungs, kidneys, joints or small vessels.

Sjogren’s syndrome is a rare disease affecting just under one in 10,000 adults. Women are 10 times more affected than men. It most often occurs around the age of 50 but can occur earlier around the age of 20 or 30. 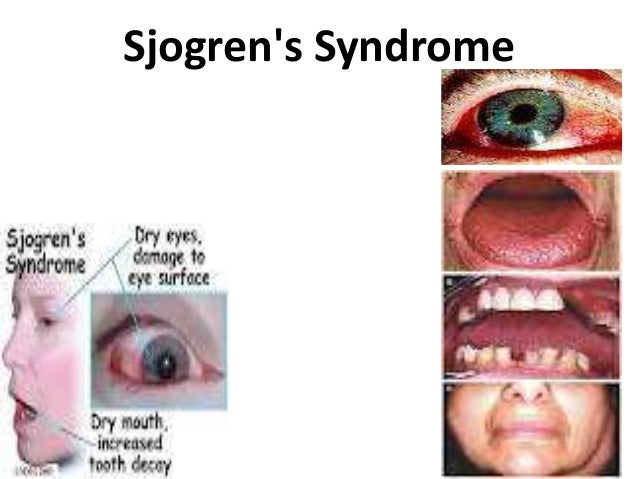 The disease can be manifested in two ways:

Cause of Sjögren’s syndrome

The cause of Gougerot-Sjögren’s syndrome is unknown. However, the disease results from an autoimmune reaction. The reason why the body’s immune system is malfunctioning and attacking its own tissue is still unclear. Several hypotheses are under study. According to the researchers, it is likely that the appearance of this syndrome requires both a genetic predisposition and the arrival of triggers(viral infection, hormonal changes, stress, etc.).

The symptoms of Sjögren’s syndrome

Dry eyes and mouth are usually the first to occur. However, they appear later for people who already have arthritis.

In the eyes, dryness can cause a burning sensation or itching. The eyelids often stick to each other in the morning, and the eyes are more sensitive to light.

The dry syndrome can be complicated at the eye level by blepharitis or keratitis and at the oral level by damage to the gums, caries, tooth mobility, canker sores, and oral superinfections especially by fungal infections. Hypertrophy of the parotid glands, transient or not, may be observed.

The extra glandular manifestations concern the joints (one case out of two), Raynaud’s syndrome (fingers becoming white in reaction to the cold). Other lesions are more serious but rarer, pulmonary, renal, cutaneous or peripheral nerves.

Fatigue is very common, and is accompanied by diffuse pain.

The diagnosis is difficult because the person does not have all the symptoms and that these can be related to other pathologies or to the treatment.

Various tests are essential: search for auto-antibodies in the blood (anti-SS-A, anti-SS-B antibodies), an evaluation of the production of the lacrimal glands using a filter paper (Schirmer test ), an observation of the thin membrane which covers the eye by a stain with rose of Bengal and a test of saliva to evaluate the dryness of the mouth and the detection of lymphocytic nodules on a salivary biopsy; performed at the oral salivary glands, this gesture is not aggressive and not painful. The diagnosis is based on the union of a number of these clinical and biological signs.

The doctor may also suggest screening for other localizations of the disease or other autoimmune diseases.

At the time of diagnosis, the doctor questions the patient about his general state of health, the types of medications he is taking, and also the diet and the amount of water and other fluids consumed daily.

People at risk, risk factors and prevention of Sjögren’s syndrome

The evolution of the disease

It is a chronic disease of slow evolution, without impact on the lifespan. By cons fatigue, pain and dry syndrome are difficult to bear.

The complications are related to those of dry syndrome, the appearance of systemic forms (15% of cases) or lymphoma (5% of cases) especially when the disease started early.

People with Gougerot-Sjögren should be monitored regularly by their doctor as well as by an ophthalmologist and a dentist, or even other specialists depending on the affected organs. Women with Sjögren’s syndrome usually have normal fertility and pregnancy does not affect the disease. Breastfeeding is not contraindicated.

Those who plan a pregnancy should talk to their doctor because the presence of anti-SSA autoantibodies can cause in 2% of cases heart rhythm disorders in the fetus that require close monitoring between the 14th and 26th week of pregnancy. ‘amenorrhea.

At present, there is unfortunately no cure . However, it is possible to relieve symptoms and at best try to prevent possible complications , such as eye, mouth and other organ damage.

In addition to the doctor , it is recommended to consult an ophthalmologist and a dentist on a regular basis.

It is important to keep the surface of the eyes and mucous membranes of the mouth, nose and throat moist. Here are a few tips :

Avoid dry environments including air conditioning, quit smoking, avoid caffeine and alcohol and if necessary foods that irritate the throat as well as excess salt. Protect yourself from the air and the wind and use glasses.

Some medications can make symptoms worse, such as antihistamines and some antidepressants. Ask a pharmacist or a doctor for advice.

Good hydration: drink at least a liter and a half a day divided into several times to moisten the mouth and at least one liter. Keep a glass of water nearby, day and night

To stimulate salivation, add a little lime juice to water, or chew a sugar-free gum or candy. One can also keep in the mouth a kernel of fruit.

Humidity in the house: if the air is not humid enough, it will increase the dryness of the mucous membranes of the nose and throat. The recommended moisture content varies from season to season. It is usually advisable to keep it between 30 and 50% (as measured with a hygrometer). Use a humidifier at night if necessary.

Artificial tears improve comfort and help prevent corneal complications. They are more or less viscous. Formulas containing preservatives that are irritating should be avoided. The ophthalmologist is best placed to prescribe the artificial tears adapted to your case.

In severe dry eyes, eye drops containing cyclosporine may be offered only on prescription from a hospital ophthalmologist.

Saliva replacement products (artificial saliva), in the form of spray or gel, are available in pharmacies.

Pilocarpine stimulates the production of saliva and sometimes also the production of tears. But she is only reimbursed in France in the form of magistral preparation. However, it can cause side effects (sweating, stomach pain, increased urine production). It is contraindicated in narrow-angle glaucoma and asthma.

Against dry skin: Use overgrown soaps and moisturizer. To relieve irritation or pain during sex, use a moisturizing vaginal gel, or an estrogenic cream in menopausal women.

Prevent the risk of cavities

When the salivary glands secrete less saliva, the risk of caries increases. It is advisable to brush your teeth morning and evening, and to use floss every day. Some experts recommend choosing fluoride toothpaste, or occasionally using a fluoride mouthwash (note that some toothpaste is designed for people who have a dry mouth problem: they are less irritating to the mucous membranes.) . Finally, limiting sugar consumption, especially between meals, also helps prevent cavities. Better to consult a dentist within 6 months.

There are several ways to relieve joint pain and stiffness caused by Sjögren’s syndrome and various other forms of arthritis. Physical exercise, for example, stimulates the release of endorphins (natural painkillers) and reduces inflammation by improving blood circulation. The application of heat or cold , depending on the situation, also helps to calm the pain. The moments of relaxation and quality sleep are just as essential to people who have to cope with pain. For more information, see our Arthritis fact sheet (overview) .

Pain can be treated with paracetamol, nonsteroidal anti-inflammatory drugs (NSAIDs) or aspirin. But do not take prolonged NSAIDs and aspirin without medical advice because they can cause gastric complications (ulcers, bleeding … etc.) Other treatments may be prescribed to fight against pain such as synthetic anti-malarial drugs, corticosteroids, more rarely immunosuppressants such as methotrexate. Raynaud’s syndrome can be improved by prescribing calcium channel blockers.

Serious visceral complications may require the use of high-dose corticosteroids or immunosuppressive drugs. Biotherapies (drugs created by biology), already used in chronic inflammatory joint diseases in particular are being evaluated. These drugs, such as immunosuppressants, may, however, promote the occurrence of infections.