Some consider it a reassuring noise, others as a despicable behavior. The Chinese, for their part, see it as a sign of good health. Nevertheless, for the snorer’s entourage, snoring, also called ronchopathy, is often an irritating noise, even unbearable. But where does it come from? Snoring occurs mainly when the soft tissues of the palate and uvula vibrate as the air passes through sleep, like sails flapping in the wind.

Except in cases of sleep apnea, snoring is not considered a health problem and does not bother the snorer. One can however worry about the sleep disorders that it causes to those around him. Average snoring easily achieves a sound level of 45 dB at 60 dB (the sound of a voice), while a major hum can exceed 95 dB, which corresponds to the sound of the passage of a truck! Obviously, this hinders the sleep of people who share the life of the snorer, sometimes to the point of causing chronic insomnia. Since many snorers do not know they are snoring, it is difficult to assess the frequency of this disorder in the population. According to the American Academy of Otolaryngology, 45% of adults snore occasionally, and 25% are regular snorers. As for children, it is estimated that about 10% snore regularly.

When one falls asleep, the tongue, as well as the tissues of the bottom of the palate and throat, relaxes. In some people, especially for anatomical reasons, these tissues partially block the passage of air and begin to vibrate during breathing. This is what causes snoring.

This sound breathing can be caused or accentuated by one of the following situations:

Generally, snoring is benign and has no health consequences. On the other hand, in some cases, it is associated with breathing pauses that disturb sleep. In this case we speak of sleep apnea. Apnea causes fatigue and drowsiness during the day, and is associated with increased risk of hypertension, cardiovascular disease (including stroke and heart attack).

A throaty sound, light or strong, emitted periodically during sleep, most often during inspiration, but sometimes also when exhaling.

People at risk for Snoring (ronchopathy) 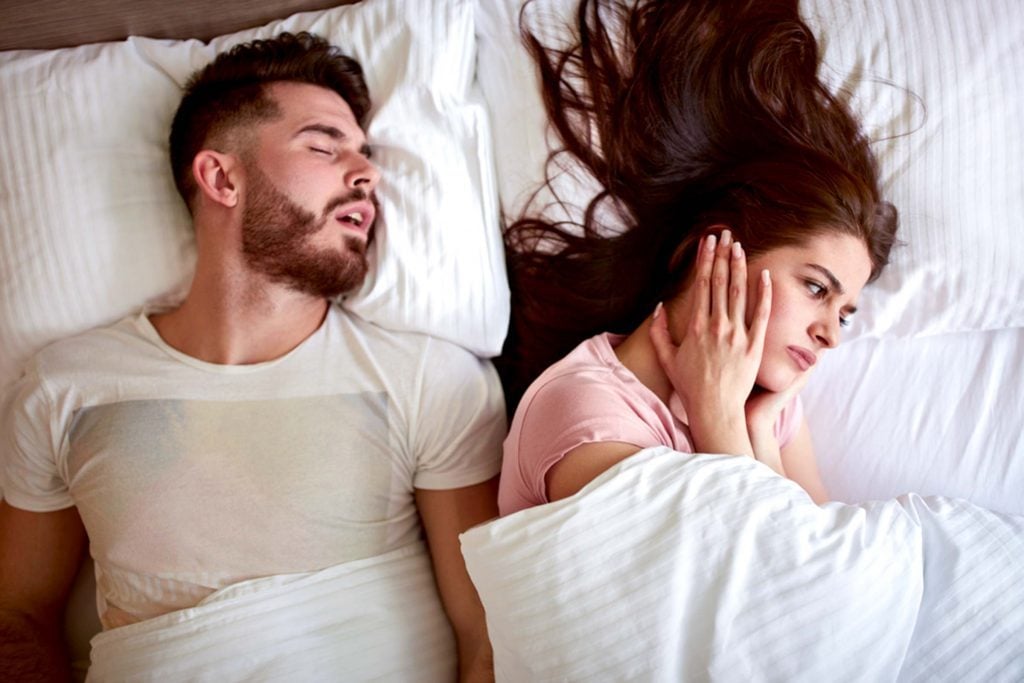 The treatment of snoring depends on its cause, its severity, the complications associated with it, including sleep apnea, and the discomfort it creates in the environment. If snoring is mild, losing weight and changing certain behaviors, such as quitting, sleeping on one’s side and avoiding sedatives and alcohol before bedtime is enough to eliminate or reduce it. However, these measures, while important, will probably be ineffective on their own to eliminate average or major snoring. In this case, classical medicine offers different approaches, some of which are described below.

Temporary congestion of the nose, such as a cold, can be treated by using decongestantmedications. In the case of chronic congestion, the doctor may prescribe a steroid nasal spray. Another method – approved by the US Food and Drug Administration – is to use a plastic nasal strip (Breathe Right Nasal Strips or Air Plus). This elastic tape sticks on the nose and increases the opening of the nostrils, which facilitates the passage of air. It may take a few nights to relearn breathing through the nose (7 to 10 nights on average before seeing an improvement).
NBDryness of the nasal passages can also cause breathing problems in dry climates and during winter due to heating. Put in this case a humidifier in the bedroom.

To better control allergies, eliminate as much as possible allergens from the house: animals, dust, carpets, etc. Antihistamines can be recommended by the doctor.

The treatment consists in wearing, at night, a dental prosthesis that advances the lower jaw by a few millimeters. The prosthesis, molded by the dentist, holds the lower jaw and tongue forward, which has the effect of enlarging the opening of the upper airways. Several syntheses, including one that includes 21 studies involving a total of 320 patients, conclude that this prosthesis is effective for the treatment of snoring. However, its tolerance is average and it can be uncomfortable.

Port of a CPAP device

In cases of major snoring, but especially sleep apnea, wearing a CPAP (“Continuous Positive Airway Pressure” or “Continuous Positive Pressure Ventilation”) device often produces spectacular results. This involves wearing a nasal mask attached to a small pump during the night, which forces the entry of ambient air into the mouth at a pressure slightly above atmospheric pressure. The air inlet prevents the tissues from sagging. When the mask is well accepted, its effectiveness is excellent. However, it must be worn every night and is sometimes poorly tolerated. The choice of a mask requires the advice of a professional.

Approved by Health Canada in 2006, palatal implants are small polyester son the doctor place in the palace soft, in order to firm up loose tissues that vibrate and cause snoring. The intervention is done under local anesthesia. Efficacy is moderate.

Surgical treatments are especially recommended for snoring with significant sleep apnea. There is very little quality research demonstrating sustained efficacy of surgery for snoring alone. Moreover, these procedures are not without risk.

The classical practice (called uvulo-palato-pharyngoplasty) is to surgically remove part of the soft palate or the uvula, or both, to widen the airways. If necessary, nasal polyps or tonsils can also be removed by surgery. It is an operation that is done under general anesthesia. In children, the extraction of tonsils alone (tonsillectomy) is the first treatment of snoring. The stay in the hospital is 1 to 2 days and is followed by a convalescence period of 1 to 2 weeks. The operation is effective in two thirds of the cases.

The laser treatment to remove part of the soft palate is done under local anesthesia and sometimes requires several sessions (2 to 5). It is also painful. It can be effective especially in people who are not overweight. However, the positive results do not seem to persist in the long term, and this treatment can even sometimes lead to an increase in snoring and apnea.

This recent procedure consists in cauterizing the thickness of the tissues that impede the passage of air. It involves heating the subcutaneous tissue with a needle attached to a microwave generator. This heating causes a lesion which, by healing, retracts the veil by hardening the tissues. It is recommended to perform several low intensity sessions. The procedure takes about thirty minutes under local anesthesia. The pain that follows seems more moderate than for conventional surgery or laser.

Searches. A new procedure being tested uses the injection of a sclerosing chemical into the subcutaneous portion of the soft palate. This product induces retraction of the soft palate and thus widens the airways. According to the researchers who developed and tested it, this procedure is less expensive and less painful than the previous one and its effectiveness rate is similar: of the 27 snorers who underwent the intervention in the context of a study, 92% had not resumed snoring 2 months later; and 75%, 19 months after. Further studies with a limited number of participants confirmed the effectiveness of this technique. However, there is too little data to recommend this procedure. More research is needed.