It is characterized by an intense fear of situations in which the phobic person is confronted with the eyes of others. This fear quickly becomes a deep anxiety when it comes to speak in front of a group of people or simply when it is observed by people who are not part of his entourage.

The fact of being exposed to the gaze and the judgment of others creates, for the person with social phobia, extreme anxiety fueled by the fear of acting so humiliating or embarrassing . She thus isolates herself little by little in order to avoid these situations which cause to her an important discomfort.

Social phobia could be likened to an extreme shyness and pathology having a significant impact on the social , family and professional life of people who suffer from it. People suffering from social phobia seek to avoid at all costs the distressing situations in which they must come into contact with other individuals. They are very aware of their difficulty and will often be slow to consult because they are often ashamed of their disorder. They also very often have low self-esteem .

According to recent studies, 2-4% of the population is said to have social phobia . It would affect more women than men and would begin in adolescence.

To make the diagnosis of social phobia, it is necessary to make sure that the person shows a persistent fear of the situations in which she is exposed to the eyes of others.

The person with social phobia is terrified of saying or doing anything that might lead others to have a negative judgment against him. This fear will quickly become a permanent anxiety that will cause the person to avoid these situations by avoidance behaviors.

The health care provider can refer to the diagnostic criteria for social phobia listed in the DSM IV ( Diagnostic and Statistical Manual of Mental Disorders – 4 th edition) or ICD-10 (International Statistical Classification of Diseases and Related Health Problems related – 10 th revision). He will conduct a specific clinical interview to look for signs of manifestation of this disorder.

Numerous scales such as the Liebowitz  social phobia scale are available to doctors and psychologists. They will be able to use them to objectively validate their diagnosis and to evaluate the intensity of the social phobia presented by the patient. At present, it seems that neurobiological , educational , environmental and psychological factorswould come into play in the emergence of social anxiety.

Although no gene has been clearly identified, studies highlight a family risk . If one member of a family suffers from social phobia, there is more chance that another member of that family will be affected by this disorder than in a family where no one is affected. A study conducted on identical twins (monozygotes) shows that if one of the twins suffers from social anxiety, there is a 12.6% chance that his twin will also be affected. This probability increases to 9.8% in the case of different twins (dizygotes).

Other studies highlight hormonal disturbances in people with social phobia. They reveal a disrupted hormonal rate of cortisol (stress hormone) in social phobics .

Research has also focused on the disruption of neuromediators in social phobics; they report a hyperfunction of the noradrenergic system and hypoactivity of the dopaminergic system .

The education and the environment seem to play a role in the onset of social phobia. Studies show that social phobics often come from families in which there is little interaction with the externalenvironment . In their childhood, they would have often benefited from a parental overprotectionwhich would not have made them come into contact with others. Finally, there is often a traumatic experience related to exposure to the eyes and the assessment of others that may have precipitated the onset of this disorder.

People who suffer from social phobia often have other related psychological disorders, such as:

The impact of this phobia on the social spheres (reduction of leisure activities or difficulties in having romantic relationships) and on the professional sphere (difficulty attending meetings or interacting with colleagues) is noticeable. The quality of life of these people is degraded.

In rare cases, this disorder normally present in very specific situations, such as speaking in front of an audience or eating in public, can be generalized to all situations of social interaction and performance in public. This is called generalized social phobia .

Social phobia is causing great suffering for those who suffer from it. The risk of suicide is important . 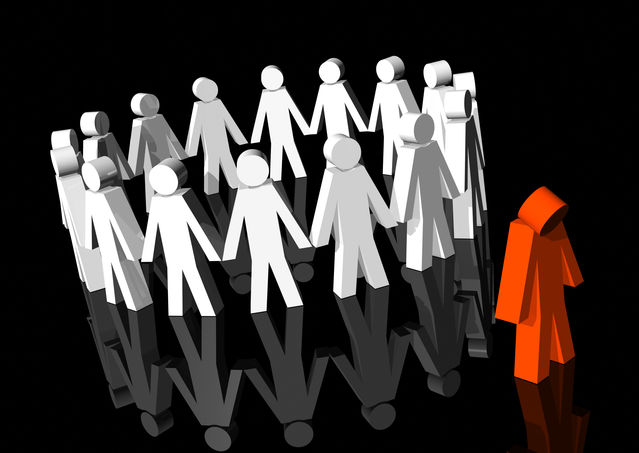 People with social anxiety have negative thoughts about themselves and significant anxiety that leads them little by little to avoid situations where they have to come into contact with other people.

People with this phobia pay close attention to the behaviors of others and always interpret them negatively. They have the impression that others reject them and criticize them. They often have low self-esteem as well as many negative thoughts of the type:

The main fears and situations feared by people suffering from social phobia are:

Faced with these fears, the person tries at first to hold on while controlling himself, but this constant stress gradually leads him to flee and avoid these social situations.

Finally, the significant anxiety generated by a dreaded situation often evolves into a panic attack with physical symptoms such as an increase in heart rate, the occurrence of vertigo, a sensation of choking, tremors, redness, etc …

People at risk for Social phobia

Social anxiety most often appears in adolescence, although warning signs such as inhibition may appear in childhood. It can also begin in adulthood, following a trauma.

Studies have shown that single, widowed, divorced or separated people are more affected by this form of phobia .

Social phobia can begin abruptly following a traumatic and / or humiliating event, such as mocking friends at school during an oral presentation.

It can also begin in an insidious way: the person feels an embarrassment when confronted with the eyes of others who gradually transform themselves into anguish.

It can appear in a specific situation (public speaking) or generalize to all situations where the person is confronted by others.

People who suffer from social phobia are often consumed with shame. They do not consult very rarely on this because they are afraid of the judgment that the doctor can have against them. In the face of any expression of stress related to the judgment and the eyes of others and which settles in time , do not hesitate to consult a specialist to prevent a vicious circle in place and in which the fear of being afraid will take over.

Parents can be alert to behaviors that might make their child feel bad about group and assessment situations. Extreme shyness combined with low self-esteem should be monitored.

The  cognitive-behavioral therapies  have proven effective in treating social phobia. The therapist can help others who suffer from this phobia to face their fear of social situations.

The psychotherapist gradually exposes the person to the dreaded situations. Through the relaxation and work done in parallel on the thoughts and emotions felt by the phobic person, the therapist will establish a list of objectives to be achieved throughout the therapy. The ultimate goal is for the patient to face their biggest fears without anxiety .

Self-  assertive therapies  are designed to help the person interact more effectively with others. They are very useful and effective enough to fight social anxiety. The purpose of these therapies is to get people to express and assert their opinions and feelings without anxiety.

They often take place in groups and role plays are part of the tools used to put people in situations close to real situations.

Combined with psychotherapy, medications are used to reduce the physical symptoms of anxiety, as well as negative thoughts and emotions.

The main drugs recommended 14  in the treatment of social phobia are antidepressants such as phenelzine, paroxetine (DEROXAT), escitalopram, sertraline and venlafaxine (EFFEXOR).

Anxiolytics such as benzodiazepines (XANAX) are used occasionally. Their effectiveness on anxiety is noticeable, but the use of benzodiazepines would tend to reinforce avoidance and prevent the phases of exposure required for extinction and the habituation of anxiety.