The tapeworm, also called tapeworm or taenia, refers to a parasitic worm; class Cestodes, which grows in the human small intestine where it can live 30 to 40 years, sometimes causing disorders. Ribbon-shaped, flat and segmented, with the appearance of a ribbon, it is hermaphroditic and can measure up to 10 meters long at adult size.

Causes of the worm

These parasitic worms are transmitted through the ingestion of meat infected with live larvae: beef or pork, usually raw or not sufficiently cooked. For man, these infective forms are called cysticerci. They are present in the muscles of animals and therefore in their meat. 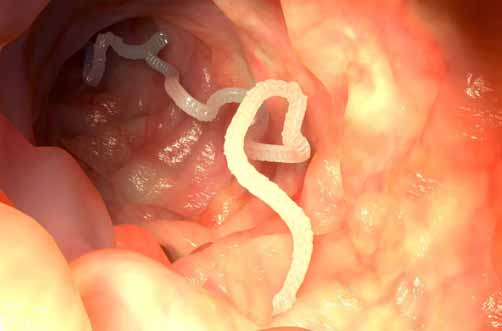 The solitary worm: understand everything in 2 min

Mode of contamination and symptoms of the tapeworm

Once ingested, the tapeworm larva attaches by its head to the lining of the small intestine. It develops gradually through the food ingested by the host and reaches its adult size in three months. The worm is then able to reproduce itself: it develops by manufacturing rings (segments) provided with a reproductive apparatus.

Regularly, rings containing the eggs are released and are expelled by the anus. The worm rings are flat, rectangular in shape and can be up to 2 cm long and 6 to 8 mm wide. They are often described as resembling pasta.

The discovery of these rings in undergarments, stools, sheets, or in the shower is often the first sign of the presence of the tapeworm in the body. The rings are often actively expelled because they are mobile, so they can be found outside the stool.

Indeed, the infection goes unnoticed in most cases and it is quite possible to shelter the parasite for years without realizing it.
However, we can observe several symptoms in some subjects: abdominal pain, nausea, appetite disorders, rashes, fatigue, headache…

Abnormal and rapid weight loss can also be a sign of infection. 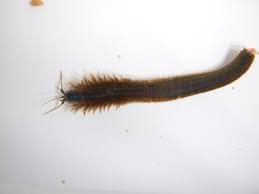 A pest control drug (or dewormer) is usually prescribed to kill the tapeworm.

Once destroyed, the tapeworm is expelled with stool through natural channels.

Solitary worm: are there any complications?

The worm is a relatively benign condition and complications related to the parasite (appendicitis, bowel obstruction …) are very rare.

In the case of Taenia Solium, however, humans may themselves become an intermediate host through the accidental consumption of parasite eggs in the stools of other humans. Ingested eggs enter the blood vessels and attach themselves to the body. Different muscle tissues, even cerebral, in the most serious cases, to form cysticerci (or larvae). This is called human cysticercosis, a serious pathology that causes ocular and neurological disorders.

How to prevent the worm?

The most important is to ensure prolonged freezing (-10 ° C for 10 days minimum) or sufficient cooking of beef or pork, in order to destroy the larvae of tapeworm.
Consumption of raw beef (steak tartare) is at risk. In particular, food hygiene measures must be respected in regions of the world where sanitary and veterinary controls are less developed.

It is important for humans not to put their stool in the reach of animals such as cattle. This action could transmit the tapeworm saginata …
It is also important not to consume vegetables that may have been spoiled by human waste, because of the risk of human cysticercosis.
This is why human fertilizer is forbidden.

Complementary approaches to treating the tapeworm

In herbal medicine, we propose to fight against the tapeworm by doing the following:

The tapeworm must disappear definitively 3 months later. If only the rings have been eliminated and not the head, it will be necessary to start again, this time by dividing the doses by 2 but spreading the treatment over 3 days. The cure will be maintained during this time. The decoction does not take place until the third day.