The ankle is the most vulnerable joint to the sprain . A sprain is a stretch or tear of one or more ligaments of a joint. Ligaments are the bundles of fibrous tissue bands, very strong and not very extensible, which unite the bones together. They give stability to the joints (see diagram).

Other joints , such as knees , elbows, and wrists , may also experience ligamentous stretching. This type of sprain occurs mostly among athletes.

The pain , the swelling and difficulty moving the joint are the main symptoms of the sprain.

In the majority of cases, the doctor can make the diagnosis after questioning the patient and performing a physical examination. If the doctor suspects a fracture , he offers X-ray radiography. More rarely, a magnetic resonance imaging (MRI) test is undertaken to see the condition of the ligaments. 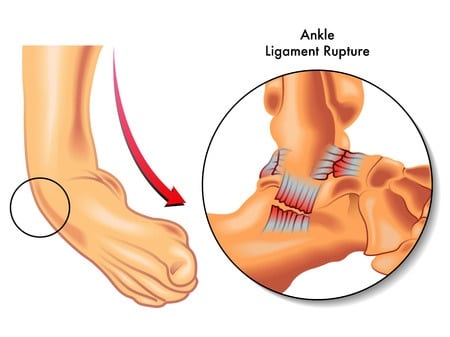 In the long term, repeated sprains can cause osteoarthritis, a disease characterized by cartilage degradation, the tissue that covers the end of the bones of all moving joints.

Symptoms of a sprain

People at risk for sprain

Prevention of a sprain

Medical treatment of a sprain

Most people can return to their usual activities within 6 weeks.

In case of moderate or severe sprain, it is not uncommon for sequelae , such as pain or instability of the ankle. The risk of re-offending is also higher.

During the 3 days (72 hours) following the trauma, the treatment of the sprain is based on the RGCÉprinciple (rest, ice, compression, elevation). The purpose of this treatment is to stop the bleeding typical of moderate and severe sprains.

Ice . Apply ice as soon as possible to minimize swelling (see tips below). Ice relieves pain, reduces inflammation and reduces swelling by tightening blood vessels. It can also reduce bleeding if ligaments have been torn. Analgesic medicines such as acetaminophen (Tylenol, Atasol) can help relieve pain . Drugs anti-inflammatory , such as ibuprofen (Advil, Motrin), are conventionally used in the acute phase (for 2 or 3 days) in addition to compressive and applying ice. They help relieve the pain. However, there is no evidence that they accelerate healing. The inflammatory reaction is part of the process of tissue repair. People who take anti-inflammatories should pay attention to their effects on the stomach, which can be major (stomach pain, gastrointestinal bleeding, ulcers, etc.). Follow the dosage carefully.

If the elbow or shoulder is touched, support the arm with a sling , but avoid immobilizing it for more than 2 or 3 days , as these joints become ankylosis very quickly. A moderate or severe sprain may require the use of an orthosis in order not to aggravate the lesion. The doctor can prescribe one. The orthosis limits movements in the axis of the injured ligaments, but allows other movements. There are some for all types of joints. According to a meta-analysis , the use of a laced ankle would allow faster resorption of ankle swelling in the short term than the elastic bandage or “taping”. In case of serious sprain, we can consider the immobilization with a plaster for ten days. 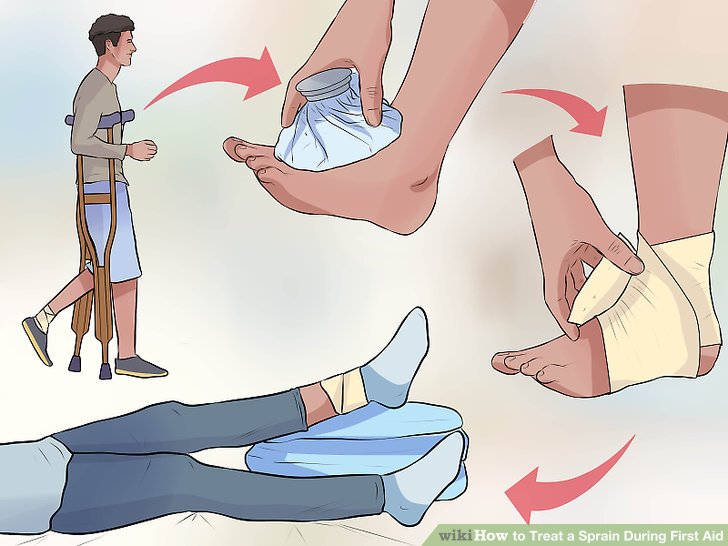 It is sometimes considered in case of severe sprains , especially in people who use the damaged joint intensively, such as athletes, or in case of persistent instability of the joint.

The resumption of the usual activities is done in a progressive way. Some exercises proprioception, exercises with elastic bands and on balance boards promote recovery and reduce the risk of recurrence. They help the ligaments regain their full capacity, reduce stiffness and strengthen the musculature which has often atrophied by the limitation of activities. A rehabilitation therapist (physiotherapist or sports physiotherapist) is able to suggest such adapted exercises to practice at home.

The treatments physiotherapy (massage, ultrasound, mobilizations, etc.) may be part of treatment, but usually are not essential to recover well.