Staphylococci are Gram-positive cocci bacteria, which are common in healthy people, usually in the lining of the nose. The bacteria can then colonize other regions, via the hands, and especially the wet parts of the body such as the armpits or the genital area.

Staphylococci are the cause of skin disorders, most often benign as impetigo.
But Staphylococcus aureus can lead to more serious infections such as some forms of pneumonia and bacterial meningitis. This type of bacteria is also a leading cause of food poisoning associated with cases of gastroenteritis.

When golden staphylococci develop in the bloodstream, they can attach to the joints, bones, lungs or heart. The infection can be very serious and sometimes even deadly. 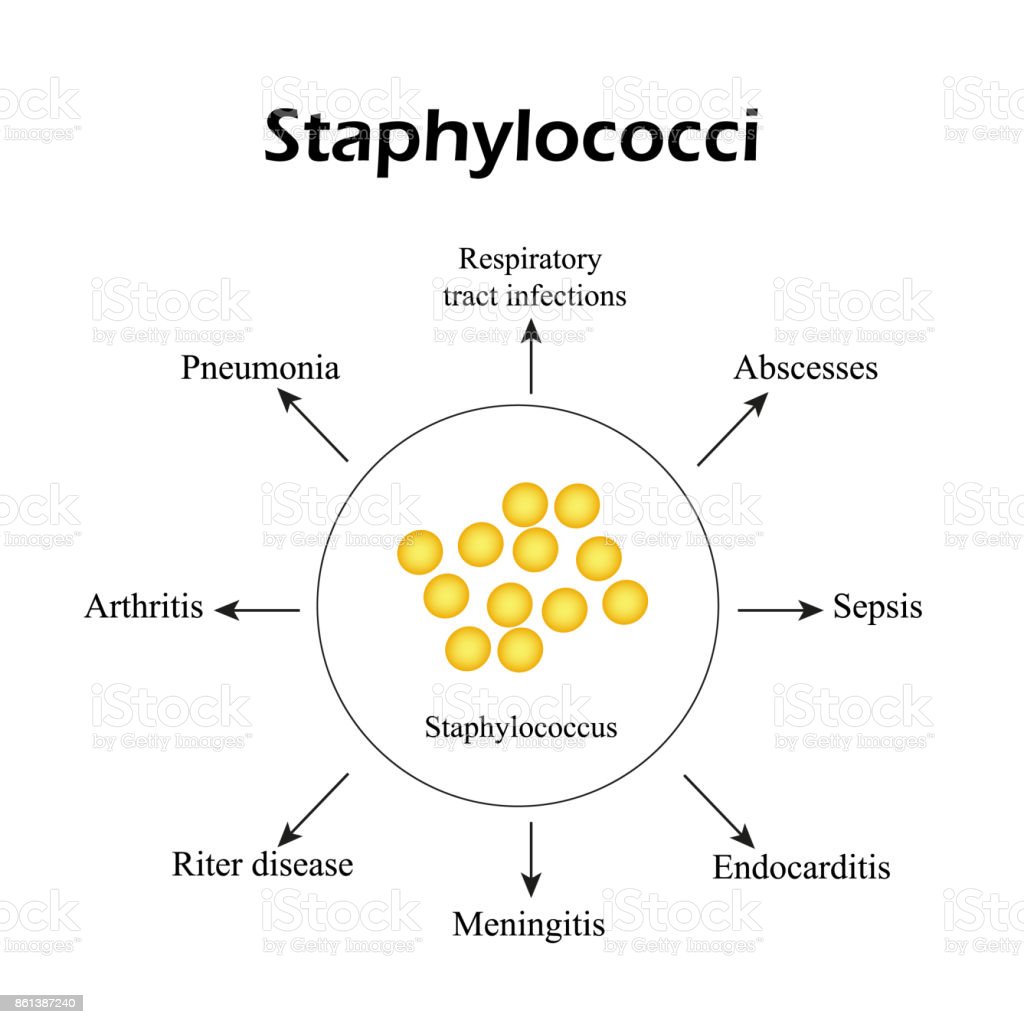 About 30% of healthy people permanently harbor golden staphylococci in their body, 50% intermittently and 20% never carry these bacteria. Staphylococci are also found in animals, soil, air, food or everyday objects.

• Sepsis. When bacteria multiply in a specific area of the body, in the skin or mucosa, they can enter the bloodstream and multiply, leading to a generalized infection: sepsis. This infection can lead to a serious shock called septic shock, potentially fatal.

• Secondary streptococcal foci. Sepsis can cause the bacteria to migrate to many parts of the body and cause infectious foci in the bones, joints, kidneys, brain, or heart valves.

The symptoms of staphylococci

Ingestion of food where staphylococci have multiplied, resulting in the presence of a large quantity of staphylococcal toxin:

Symptoms usually disappear after 24 to 48 hours. Sepsis. Also known as blood infection, sepsis occurs when bacteria enter the bloodstream and multiply. Infectious foci may appear at a distance from the starting infection, when bacteria develop in other organs such as the heart or lungs, muscles and bones, or even in surgically implanted devices such as a pacemaker or prosthesis.
Fever and chills are the first signs of sepsis.

The toxic shock. This occurs when the toxins produced by the bacteria Staphylococcus aureusenter the bloodstream in large quantities. This shock can occur as a result of the multiplication of bacteria in the vagina during menstruation, as a result of surgical complications or complications of staph infection anywhere in the body.

The mortality related to the toxic shock is very high and the death can occur very quickly, sometimes in the space of a few hours.

People at risk for Staphylococci

• People whose immune system is weakened.

• Have a cut or scratch and be in contact with a person who is infected with a staph.

• Be hospitalized or have a hospital stay. Despite efforts to eradicate staphylococcal bacteria, these remain in hospitals and are likely to reach the most vulnerable people, for example those treated for:

• Health problems such as diabetes.

• Have intubation treatments, have catheters, be on dialysis, or use mechanical ventilation devices, for example to treat chronic respiratory failure.

Drainage . Some skin infections sometimes require drainage. A doctor inserts a needle or makes an incision in the wound to remove the pus that has accumulated. This reduces the amount of bacteria and toxins present, which speeds healing.

Antibiotics . A doctor can first take samples to perform an antibiogram, an examination to identify the type of staph bacteria that caused the infection and thus choose the best antibiotic to treat the infection. The most frequently encountered golden staphylococci are, in general, susceptible to penicillin M (methicillin, oxacillin) the antibiotic of choice in first intention. They are also most often sensitive to macro ides, aminoglycosides, fluoroquinolones and synergistines.

Antibiotic treatment is taken orally for 7 to 10 days. It is very important to follow the instructions when taking antibiotics, which means taking them at the same times each day and finishing the treatment, even if you feel good after a few days. If the treatment is not effective or causes discomfort, promptly contact your doctor.

In case of infection with methicillin- resistant Staphylococcus aureus (MRSA) , antibiotics of the penicillin family are not effective. An antibiogram (test of different kinds of antibiotics on a culture of bacteria) is used to find the antibiotic to which the bacteria will not resist. An antibiotic, vancomycin, given intravenously is often effective. Linezolid, daptomycin, rifampycin, doxycycline, telavancin or ceftaroline are also used.

In patients with MRSA infection are usually treated with an intravenous antibiotic.