What promotes strabismus in children?

There are many possible causes that may explain an imbalance in the coordination of binocular vision (use of both eyes simultaneously), such as being born prematurely and / or with a low birth weight – a classic cause of congenital strabismus – or the existence of a history of strabismus in the family (late strabismus risk factor). A visual defect of an eye, an oculomotor disorder, etc. can also be involved. 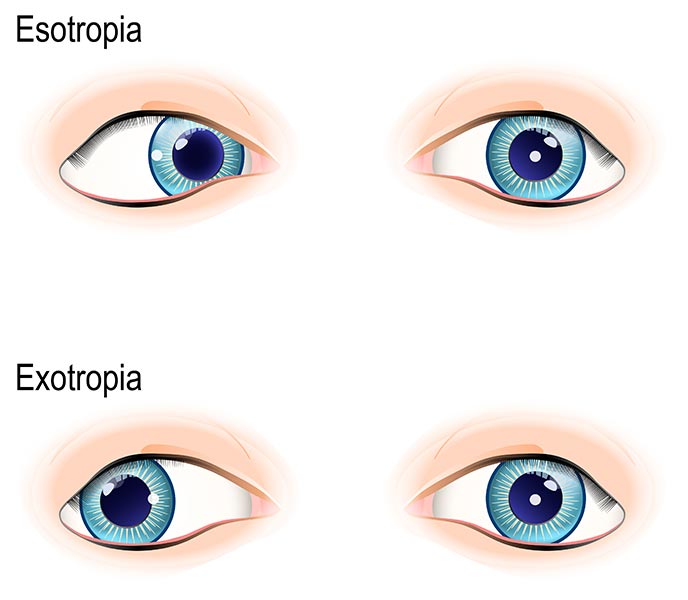 Why can strabismus appear in adults?

Most often, there has already been a history of strabismus during childhood. This lack of parallelism of the two ocular axes can then be repeated about him years later for several reasons.
– It is a recurrence and the deviation is then the same as during childhood.
– Strabismus had not been completely corrected (residual strabismus).
– The deviation has been reversed: this can occur with the occurrence of presbyopia, an exceptional solicitation of vision, a decline in the vision of an eye, a surgery Ophthalmological (cataract, refractive surgery), trauma, etc.

Sometimes, this strabismus appears for the first time in adulthood, at least in appearance: indeed, some people have always had a tendency to deviate their visual axes, but only when their eyes are at rest (intermittent strabismus), latent). It’s a heterophoria. Out of repose, this deviation disappears and strabismus therefore goes unnoticed. But if too much stress – for example, after long hours spent on screen or a prolonged work or prolonged uncomplicated presbyopia – a deviation of the eyes appears (decompensation of heterophoria). It is accompanied by eyestrain, headache, pain behind the eyes, even double vision.

Finally, the rarest situation is that of strabismus occurring in an adult without any antecedent on this side, but in a particular pathological context: a strong myopia, a history of retinal detachment, a hyperthyroidism of Basedow, an oculomotor paralysis in a diabetic, a cerebral hemorrhage, a multiple sclerosis or even a brain tumor. The double vision (diplopia) brutal installation gives warning because it is difficult to withstand every day.

Why is it so important to have your eyes on the same axis?

When this is the case, the left eye and the right eye each send an image to the brain. The latter receives therefore at the same speed and permanently, two images very close but slightly offset because our eyes do not occupy the same place on our face. By merging these images, which becomes possible at the age of four and a half months thanks to the appearance of binocular cells in the visual area, the brain obtains a unique image in relief. This is the ideal scenario. It testifies that the connections between the eye and the part of the brain integrating the visual message are normal. This “eye-brain wiring” continues until eight to ten years after birth.

What are the consequences of strabismus?

– Amblyopia, functional consequence of strabismus
a second consequence, much more serious, is a source of invisible handicap, this time: it is the amblyopia of the deviated eye, which develops when the two axes of the eyes are not aligned. Each eye then looks at a different place and sends to the brain an off-line image, not superimposable to that of the other eye (too different to be merged). The consequence is the appearance of a double vision. To avoid this double vision, the image of the deviated eye is neutralized by the brain. In other words, although the deviated eye is functioning, the brain acts as if it did not exist, as if that eye did not see. This is amblyopia, and it is reversible, provided you react in time. Without this, the deviated eye becomes blind because the brain no longer interprets the images it sends.

– The consequence on the relief vision.

Third consequence, finally: the poor vision of the deviated eye jeopardizes the vision in relief. Normally, it develops in infants between four months and a half to twenty months. But if in this age group, the brain receives two images too different to be fused, this vision in relief cannot appear. Thus, it does not develop in early or congenital strabismus, starting before four months. Only in cases of late strabismus after the age of six months can the relief vision that has begun to develop be saved, provided that action is taken very quickly. 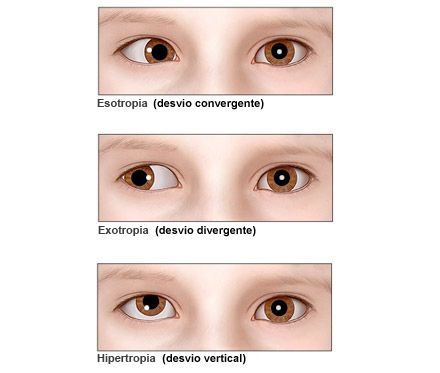 When and who to consult in case of strabismus?

It is better to consult the ophthalmologist promptly to the slightest doubt. We must not hesitate to tell the secretariat that the reason for the consultation is strabismus: it is a relative emergency, but too few parents know it. Even in a tiny child who does not know how to speak and therefore express what he sees, the ophthalmologist has the means to check whether it is a real strabismus or not. In children of Asian origin, there may be confusion with an epicanthus, so called because it corresponds to a particular form of the upper eyelid: by masking a part of the white of the eye, it gives the illusion that the shady child, when in reality it is not so! If there is evidence of strabismus, the ophthalmologist explores the fundus, looks for a visual disturbance and a disorder associated oculomotor. It also checks whether or not there is an underlying pathology that can explain strabismus and related to surgery: for example, a congenital cataract, much more rarely, a retinoblastoma (tumor of the eye).

What are the possible complications of strabismus?

The visual prognosis of the deviated eye and the relief vision depend, among other things, on the type of strabismus, its precocity and its management. A strabismus is said to be early, when it appears between zero and six – eight months. Intermediate up to two and a half years and late from the age of two and a half to three years. On the other hand, when an ocular deviation (strabismus) appears, the parents realize that an eye turns either continuously or intermittently. However, the constant strabismuses installed early (beginner before six – eight months) will have no vision in relief. Those who are intermittent or who are installed later, after two and a half years, at an age when binocular vision is acquired, will keep it only if the treatment is early and correctly conducted.

What is the medical management of strabismus?

It is largely based on the management of amblyopia. And to avoid the definitive loss of the vision of the amblyopic deviated eye, the only solution is to have it work a lot and as soon as possible, before the child reaches the age of the end of cerebral plasticity ( a priori up to six – seven years, sometimes a little more, but in any case before ten years).

This support is based on cooperation between ophthalmologist, parents, and orthoptist and child professionals. The ophthalmologist is responsible for organizing the long-term treatment and for the orthoptist, to ensure the controls. For their part, parents and institutions (daycare, school) must really cooperate to ensure that the child wears his glasses. Because the challenge is to save his deviated eye. To save the vision of an amblyopic eye, it is necessary to hide the eye which sees well to oblige the eye which sees evil to work. At first, the healthy eye is masked all day. Subsequently, when the connection between the amblyopic eye and brain is restored again, the masking time of the healthy eye decreases with a relay by filter glasses which aesthetically, are not seen. It is still necessary to have them carried by the child with a lot of seriousness: the future vision of the eye that was deviated depends on it. To achieve this, parents must show their child that they attach great importance to it and explain why: a child, even a very young child, understands better than one might think. Strabismus: when to be operated?

Sometimes with a late strabismus, correct the visual defect and solicit the defective eye is enough to remove the lack of parallelism of the two axes of the eyes. But often this is not the case and it is up to the ophthalmologist to do it, surgically.

For early strabismus, in the youngest of nine months to two years, he readily uses botulinum toxin by injecting it directly into the oculomotor muscles which causes their relaxation and can avoid surgery.

If the deviation persists despite the injection of botulinum toxin or in a larger child (after two and a half years), it is necessary to consider surgery of the oculomotor muscles: it consists of relaxing the muscles a little too tight and to strengthen those too relaxed. Adjustable suture systems to be as accurate as possible are finally reserved for the much larger child. Finally, the ophthalmologist can still intervene surgically in adulthood.

What is the place of orthoptics in case of strabismus?

The orthoptist (“physiotherapist” of the eyes) makes work the amblyopic eye of the child, then both eyes simultaneously, thanks to specific exercises: the key exercises of this reeducation are based on the games of pursuit and fixing of points bright with one eye, then both. The orthoptist can also put different prisms in front of the eye to deflect the image and complicate the task of oculomotor muscles to push them to work even more.

The orthoptist can again intervene in adulthood, in case of reappearance of an old or residual strabismus, for example: in this case, a series of twelve to fifteen orthoptic sessions to stimulate the vision of the two eyes and getting them to work in a coordinated way is readily prescribed.

Finally, the orthoptist is solicited when it appears a diplopia (double vision) persistent because it is unbearable daily. To help images of the left eye and the right eye to merge while the oculomotor muscles of one of the eyes no longer respond (in the context of a neurological condition of the adult for example), the Orthoptist can use a striated plastic film, glued to the glass and be used as a prism, to deflect the image. Subsequently, this type of correction can be incorporated in the glass.