Syringomyelia is characterized by the formation of one or more cavities inside the spinal cord, which can cause severe chronic pain, neurological disorders and motor impairment leading to loss of autonomy. These cavities called “syrinx” damage the neurological functions of the spinal cord. It often results from a Chiari malformation and its prevalence is about 8 in every 100,000 people. The severity of symptoms of syringomyelia varies greatly, depending on its underlying cause, the characteristics of the cavity (size, shape, location, progression) and the damage to the spinal cord. Half of people with syringomyelia have no symptoms or only minor discomfort. When syringomyelia occurs without known cause, it is benign in two-thirds of cases.The disease develops silently for several years and the first signs occur between 20 and 40 years and can gradually evolve to a major handicap and a loss of autonomy of the person affected:

Some of these symptoms may at first guide the physician’s diagnosis of multiple sclerosis . Syringomyelia eventually causes scoliosis in half of those affected.

Syringomyelia can also be secondary, with syrinx developing on a segment of the spinal cord damaged by trauma, infection (meningitis), haemorrhage, tumor or arachnoiditis (inflammation of the meninges). Note that we do not always know the cause of the disease, which is then designated as a syringomyelia primitive or idiopathic, often benign. 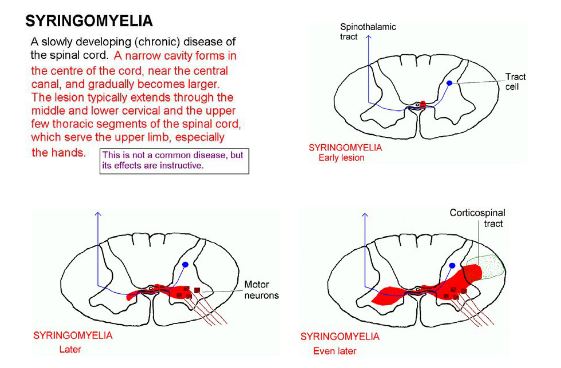 Syringomyelia usually occurs around the age of 30 and affects men more frequently than women. There is also family syringomyelia accounting for 2% of all cases of syringomyelia.

Prevention and treatment of syringomyelia

The treatment aims to correct the underlying cause, for example the removal of a tumor. The use of surgery can stabilize the evolution of symptoms or make them regress a little, but the risk of relapse is important and may require a second operation. The type of surgery depends on the characteristics of the syrinx and the neurosurgeon’s experience. The operation consists of restoring the flow of the cerebrospinal fluid.

Some patients experience severe chronic pain that greatly affects the quality of life. They are treated with medication (tricyclic antidepressants, muscle relaxants, anticonvulsants). People with syringomyelia often use a neurostimulation device to relieve pain. Electrodes placed on the skin send small electrical discharges that will interrupt the transmission of pain signals.