Tetanus is a disease caused by Clostridium titanic bacteria. The toxin produced by this bacterium affects the nervous system and causes painful muscle paralysis (or spastic paralysis). Tetanus is a serious and deadly disease in about 50% of cases, down to 15% with intensive care treatment. Tetanus is difficult to treat and requires hospitalization in intensive care unit. There is a vaccine against tetanus. Recommended in Canada and mandatory in France since 1952this vaccination has been shown to be effective (provided the recalls, to be done every ten years, are performed) and the number of cases has become very low. But tetanus remains a real scourge in developing countries where routine vaccination has not been implemented. In these parts of the world, there remains a major public health problem.

The bacterium Clostridium tetani present in the soil or animal feces is a very resistant bacterium. It enters the body simply by a wound that can easily go unnoticed. At the level of this wound, the spores are activated then neurotoxins, including tetanospasmine, are manufactured. The latter will gain blood circulation, neurogenic (progression along the nerves) and lymphatic and reach the neurons. By blocking the neurotransmitters that inhibit muscle tone and contraction, they will then cause stiffness, uncontrolled muscle spasms, and muscle paralysis. The first paralysis concernsthe jaw and then the pharynx, the larynx and the respiratory muscles (causing asphyxiation). These paralyses are so powerful that they can cause bone fracturesthroughout the body.

The incubation period varies between 3 days and 3 weeks and is usually 8 to 10 days.

Tetanus exists in different forms. The most common in developed countries and the most serious is the generalized form. There are also localized forms, at the level of the wound, or cephalic (which concern the cranial nerves). Finally, a specific form affects the newborn. It is the neonatalform that kills in developing countries (nearly 220000 cases per year with a mortality rate of 90%). This form of tetanus occurs in children, whose mother is not immune, for example when the instruments used to cut the umbilical cord are poorly sterilized. Tetanus appears between 3 and 14 days after birth. He also strikesmany mothers at the time of delivery, especially in the case of postnatal care carried out in unsanitary conditions. In case of survival, sequelae are very important.

The diagnosis of tetanus requires no special examination and is based on the symptoms presented by the patient: contracted jaw, grimace described as sardonic smile, hyper-extension of the neck, upper limbs in flexion, tight fists, lower limbs in extension . In neonatal tetanus, the World Health Organization (WHO) describes that the affected child normally eats and cries for the first two days after birth and then fails to eat and cries a lot. It also has stiffness and spasms.

The bacteria that cause tetanus can enter the body through a simple wound in the skin or mucous membranes, a burn or sometimes a bite. Childbirth or abortion, when they do not proceed satisfactorily, is also a good time for the entry of the bacteria. But in 20% of cases, we do not know how the bacteria could enter the body. 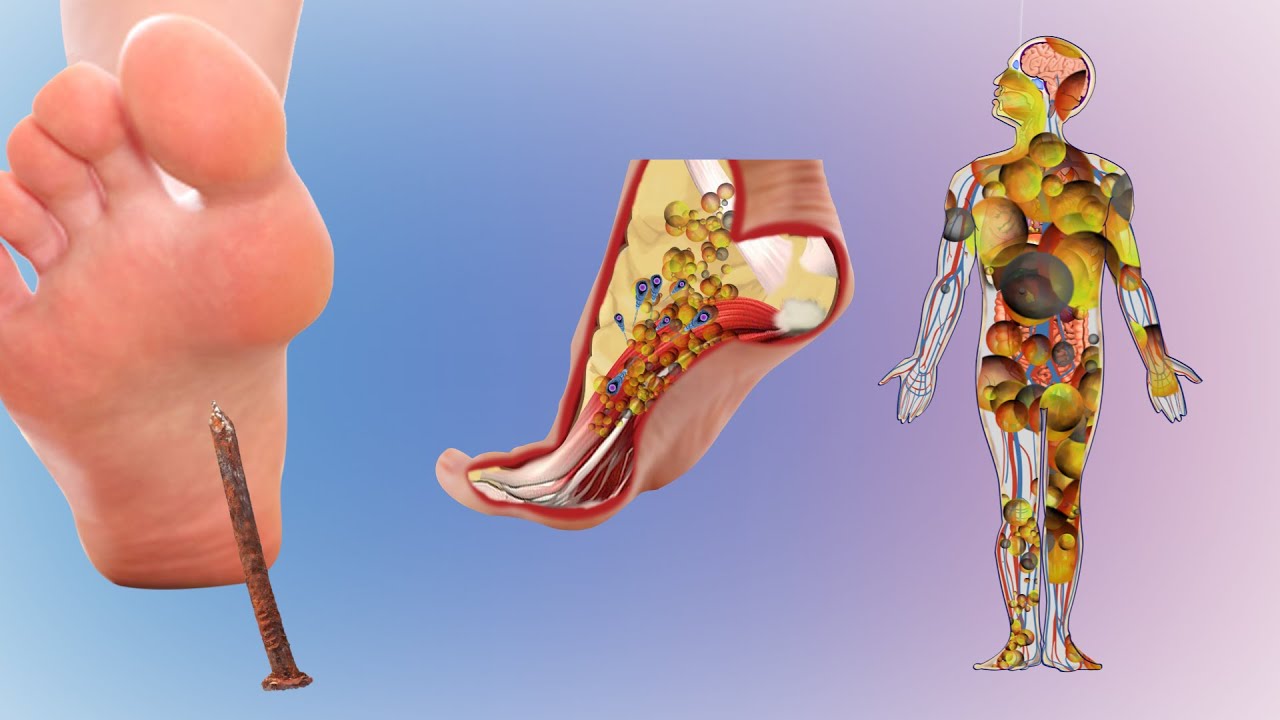 The symptoms can appear several weeks after the arrival of the bacteria in the body. The symptoms of tetanus are:

For neonatal tetanus, the symptoms are:

People at risk for Tetanus

Older people and women (because they are less well vaccinated) are at higher risk of developing tetanus.

Injuries, dental infections, animal bites, foot infections, common in diabetics, piercings, tattoos, wounds after surgery … anything that can create a  wound  increases the risk of develop tetanus since the bacteria can get into it and produce toxins in the body.

In countries where the population is not vaccinated, natural disasters are a high-risk event for tetanus (egg tsunami).

There is well-supported vaccineagainst tetanus. Its effectiveness is very important as long as the reminders are seriously done.

Vaccination in adults requires three injections, the first and the second being performed between 4 and 8 weeks apart. The third must be done between 6 and 12 months later.

In France, vaccination against tetanus for children less than 18 months is mandatory. It then requires a reminder every 10 years, throughout life.
Tetanus is a non-immunizing disease. A person who has presented with tetanus is not immune and could therefore contract the disease again if they are not vaccinated.

The treatment of tetanus is complex. It requires hospitalization in intensive care. The supervision of the patient is permanent.

The treatment mainly involves care at the wound level (to clean it and limit the development of the bacterium at this level) and by medication management of symptoms, especially muscle contractures, spasms and pain. Anti- tetanus immunoglobulins (antibodies) and antibiotics, including penicillin, in an attempt to kill the bacteria, are usually prescribed.

A vaccination will be made because an infected person does not become immune.

In the event of a wound and the risk of infection in a person who is not or poorly vaccinated, immunoglobulins can be administered for prevention. As a reminder, the only way to avoid contamination is vaccination.