The incisor (derived from the term incision, from the Latin incisio, incise) is a type of tooth, located in the oral cavity and used to cut food.

The human dentition has eight incisors distributed as follows:

They constitute the dental arches located at the front of the maxillary and the mandible, respectively corresponding to the upper and lower jaws.

The incisors are the first visible teeth and have an important role in dental esthetics. It is they who are at the forefront of the physical traumas of childhood.

The term “teeth of happiness” is used to denote the distance between the two upper medial incisors. This gap is actually called “diastema”.

The central and lower lateral incisors are often substantially the same. 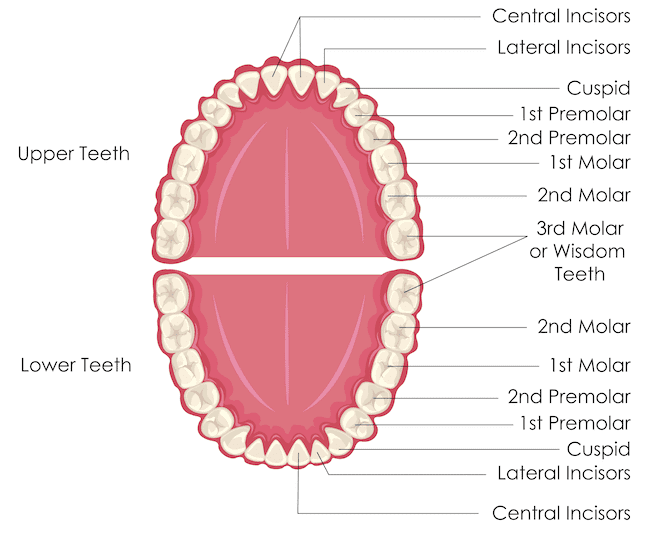 Located in the oral cavity and at the angle of the dental arch, the canines are 4 in number, distributed as follows:

Canines are sharp teeth with two sharp edges. Thanks to this and their sharp shape, the canines are used to shred sturdier foods like meat. This is a different tooth than the other teeth since the beginning of the mammalian line.

All carnivores have a canine that is heavily fanged, but the ancestor common to all current carnivore families, the Miacis, a 60-million-year-old prehistoric mammal, had 44 teeth and poorly developed canines.

These teeth are sometimes called “teeth of the eye” because their very long roots go back to the area of ​​the eye. This is why an infection in the upper canines can sometimes be transmitted to the orbital region.

The premolar (molar, from the Latin molaris, from mola, meaning millstone) is a type of tooth that is mainly used to grind food.

Premolars are teeth with a slightly cubic appearance, forming a crown that usually has two rounded tubercles.

The molar (from Latin molaris, derived from mola, meaning millstone) is a type of tooth that is used primarily to grind food.

Located in the oral cavity, the molars are the most posterior teeth of the dental arch. The human dentition has 12 permanent molars distributed as follows:

The third molars, called wisdom teeth, are often a source of problems and pains. They can particularly cause infections or displacements of the dentition.

Here is the calendar of physiological eruption of permanent teeth