The tuberculosis is a contagious disease that usually attacks the lungs, but sometimes to other parts of the body such as the kidneys, lymph nodes and bones. In the past, TB was often fatal and was called “consumption.” Nowadays, antibiotic treatment can cure it.

For most healthy people, the risk of getting TB is low. In Canada, it is reported about 1,600 new cases of TB each year, which is significantly less than at the beginning of the XX the century, when it was one of the main causes of death in the country. Although the disease is less common than it was, it remains an important public health problem in many parts of the world and killed 1.4 million people in 2010.

On March 24, 1882, the German physician Robert Koch isolated the bacillus Koch (or Mycobacterium tuberculosis), the bacterium responsible for tuberculosis, which has coexisted with humans for millions of years. This discovery earned him the Nobel Prize in Medicine or Physiology in 1905. The day of March 24 has also been declared World TB Day by the World Health Organization (WHO).

There are 3 types of tuberculosis.

Some facts relating to the transmission of tuberculosis:

A distinction must be made between infection with Koch bacillus and tuberculosis. “Latent” or “dormant” infection is widespread. It is estimated that around 1/3 of the world’s population is infected with the bacillus, most of the time without knowing it. It is an infection that persists throughout life. Thus, in the vast majority of cases, the bacterium does not cause disease, because the immune system acts on the infection. It also happens that the bacteria are completely eliminated from the body, but it is rather rare.

People with latent infection have no symptoms and therefore are not contagious. If, for some reason (such as a disease), their immune system weakens, bacteria can proliferate. If they multiply enough, it will cause the typical symptoms of tuberculosis. According to WHOM statistics, 5 to 10% of infected people worldwide can become ill. The infection then enters its active phase. The risk of tuberculosis is higher in the two years following the moment of infection.

Tuberculosis in the world

The tuberculosis is part of the so-called “diseases of poverty” because they spread especially in environments where rampant the following conditions:

It is therefore persistent in economically disadvantaged countries. According to WHO, one-third of TB cases are concentrated in the South-East Asia region (which includes Indonesia, Cambodia, Thailand and Vietnam)? The Africa (especially in sub-Saharan Africa) and the Middle East are closely. These three regions of the world account for 85% of all TB cases 2. In these countries, the frequency of tuberculosis in prisons is often 100 times higher than in the general population. Refugee camps also present a major problem. There are also endemic areas of tuberculosis in India, China and Mexico.

In the West, the disease is more prevalent in underprivileged areas, among Aboriginal people, homeless people, intravenous drug users, people with AIDS, and those born in a country where TB is common.

In Canada, the emergence of strains of antibiotic-resistant bacteria and increased international travel led to a resurgence of the disease in the 1990s. However, the number of cases has stabilized since the following decade. From sanatorium to antibiotics

Even before its infectious nature was established, people with TB were isolated – sometimes forcibly – to prevent them from contaminating the population.

German botanist Hermann Brehmer owes the “invention” of the sanatorium. Affected by the disease, it is said that he went to stay in the Himalayas waiting for death and that, to his great surprise, he recovered his health. He returned to Germany and opened an establishment according to the recipe “clean air, cool weather, sun, complete rest, abundant food”. Such establishments were quickly created elsewhere in Europe and, later, in North America. The first Quebec sanatorium opened in 1911 in Sainte-Agathe-des-Monts, a village in the Laurentians. At that time, tuberculosis was cutting back 12,000 lives a year in Quebec.

The development of streptomycin and other antibiotics in the 1940s almost immediately sidelined the sanatorium. The general belief at the time was that TB would one day be completely eradicated. What has not happened yet?

People at risk for Tuberculosis

Even if the disease occurs for no obvious reason, its onset or activation of a “dormant” infection is more likely to occur in people with compromised immune systems for any of the following reasons:

Note. According to a study conducted in a hospital center in Montreal, 3 about 8% of children admitted through intercountry adoption are infected with the tuberculosis bacterium. Depending on the country of origin, a bacilli test may be recommended. 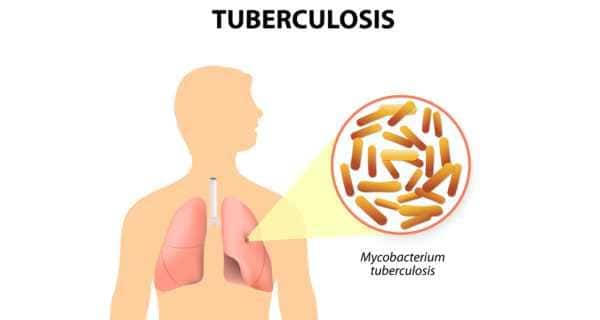 During the active phase of the disease, symptoms are usually present (fever, night sweats, persistent cough, etc.). The doctor relies on these symptoms, but also on the results of subsequent tests and examinations.

Skin test. The skin test can detect the presence of Koch’s bacillus in the body. In a newly infected person, this test will be positive 4 to 10 weeks after infection. A tiny amount of tuberculin (a purified protein of Mycobacterium tuberculosis) is injected under the skin. If a skin reaction occurs at the site of the injection (redness or swelling) within 48 to 72 hours, this reveals the infection. If the result is negative, the doctor may suggest a second test a few weeks later.

Pulmonary radiography. If the patient has symptoms of persistent cough, for example, a chest x-ray will be prescribed to assess the condition of the lungs. During the follow-up, the X-ray also makes it possible to check the evolution of the disease.

Biological tests on samples of pulmonary secretions. The secretions are first observed under a microscope to check whether the bacteria present in the secretions are part of the family of mycobacteria (Koch’s bacillus is a mycobacterium). The result on this test is obtained the same day. Secretions are also cultured to identify bacteria and whether or not they are resistant to antibiotics. However, it takes 2 months to get the results.

If the microscopic test reveals the presence of mycobacteria and the medical evaluation suggests that it is tuberculosis, antibiotic treatment is undertaken without waiting for the result of the microbial culture test. Thus, the symptoms are relieved, the disease is curbed, and the person is less likely to spread the infection to those around him. The treatment can then be rectified, if necessary.

The first-line antibiotics can defeat tuberculosis in nearly all cases. Affected individuals are asked to stay at home or wear a mask in public until the doctor determines that they are no longer infectious (usually after two to three weeks of treatment).

First line treatment. The following four antibiotics are generally prescribed: isoniazid, rifampin, ethambutol and pyrazinamide, which are administered orally. To be effective and completely kill bacteria, medical treatment requires daily medication for a minimum of 6 months, sometimes up to 12 months. All these antibiotics can cause liver damage to varying degrees. Tell your doctor if you have symptoms such as nausea and vomiting, loss of appetite, jaundice (a yellowish complexion), dark urine, or fever with no apparent cause.

Second line treatments. If the bacteria are resistant to the two main antibiotics (isoniazid and rifampin), it is called multidrug resistance (MDR-TB) and must use the 2 drugs line. Sometimes 4 to 6 antibiotics are combined. They must often be taken over a longer period, sometimes up to 2 years. They can also cause side effects, for example, numbness in the hands or feet, and liver toxicity. Some of them are administered intravenously.

Treatments in case of ultra-resistant bacteria. If the strain of infection is resistant to several treatments normally offered in the first or second line, more severe and more toxic treatment, often administered intravenously, is used to control this so-called XDR-TB or XDR-TB.

Contraindications. The alcohol and acetaminophen (Tylenol) are cons-indicated during the entire duration of treatment. These substances impose an increased effort on the liver and may pose problems.

In case of power deficient, taking a multivitamin and minerals can help prevent a recurrence of the infection. Adopting more balanced eating habits should be favored to accelerate healing where possible. For more details on the basics of healthy eating, visit our Better Eating section.