Tuberous sclerosis of Bourneville is a complex genetic disorder characterized by the development of a benign (non-cancerous) tumor in different parts of the body. These tumors can then be localized in the skin, brain, kidneys, and other organs and tissues. This pathology can also cause serious problems in the development of the individual. Nevertheless, the clinical manifestations and the severity of the disease vary from one patient to another.

The associated skin abnormalities are usually similar to skin spots or areas with lighter skin than the rest of the body. The development of tumors in the face is called angiofibroma.

In the case of attacks of the brain, the clinical signs are epileptic seizures, behavioral problems (hyperactivity, aggressiveness, intellectual disabilities, problems in learning, etc.). Some children with the disease even have a form of autism, disorders in development, affecting social interactions and communication. Benign brain tumors can also cause complications that can be lethal to the subject.

The development of tumors in the kidneys is common in people with tuberous sclerosis in Bourneville. This can lead to severe complications in kidney function. In addition, tumors can develop in the heart, lungs and retina.

Symptoms of Tuberous sclerosis of Bourneville

The clinical manifestations associated with tuberous sclerosis of Bourneville vary according to the organs affected. In addition, the symptoms associated with the disease vary widely from one individual to another. With symptoms ranging from benignity to severity.

The most widely identified symptoms in this disease include epileptic seizures, cognitive and behavioral disorders, skin abnormalities, and so on. The most commonly affected organs are: the brain, heart, kidneys, lungs or skin.

The development of malignant tumors (cancerous) is possible in the context of this disease but remains rare and mainly affects the kidneys.

Renal involvement is characterized by the development of cysts or angiomyolipomas. These can lead to kidney pain or even kidney failure. If significant bleeding is noticeable, this may be due to deep anemia or severe hypertension. Other more serious but rare consequences can also be visible, in particular the development of carcinomas (tumor of the cells constituting the epithelium). 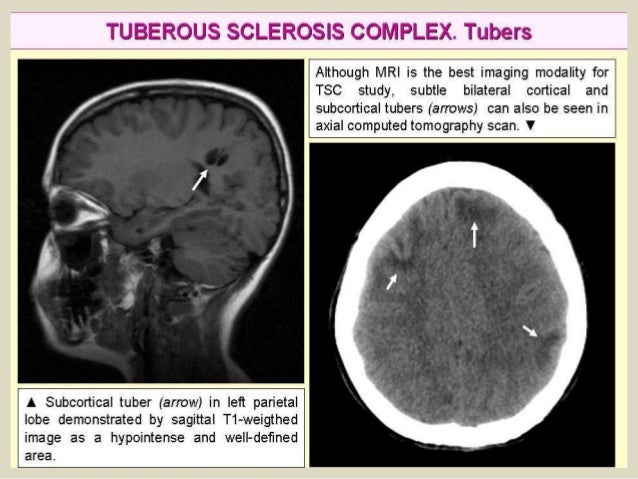 Eye damage can be akin to visible tasks in the retina, causing vision problems and blindness.

The skin abnormalities are numerous:
– hypomelanic macules: which result in the appearance of clear spots on the skin, anywhere on the body, consequence of a melanin deficiency, protein giving the color to the skin. Skin;
– the appearance of red spots on the face;
– discolored plaques at the forehead;
– other skin abnormalities, dependent on one individual to another.

Pulmonary lesions are present in 1/3 of the patients with a slight female predominance. The associated symptoms are then more or less important breathing difficulties.

The origin of the disease is genetic and hereditary.

The transmission concerns mutations at the TSC1 and TSC2 genes. These genes of interest come into play in the formation of proteins: hamartine and tubercle. These two proteins make it possible, by an interactive game, to regulate cell proliferation.

Patients with the disease are born with at least one copy of these mutated genes in each of their cells. These mutations then limit the formation of hamartine or tubertin.

In the context where the two copies of the gene are mutated, they completely prevent the production of these two proteins. This protein deficiency therefore no longer allows the body to regulate the growth of certain cells and, in this sense, leads to the development of tumor cells in different tissues and / or organs.

The risk factors for developing such pathology are genetic.

Indeed, the transmission of the disease is effective through an autosomal dominant mode. That is, the mutated gene of interest is localized to a non-sex chromosome. In addition, the presence of only one of the two copies of the mutated gene is sufficient for the disease to develop.

In this sense, an individual with one of these two parents suffering from the disease has a 50% risk of developing himself the sick phenotype.

Prevention and treatment of Tuberous sclerosis of Bourneville

The diagnosis of the disease is first of all differential. It is based on atypical physical criteria. In most cases, the first characteristic signs of the disease are: the presence of recurrent epileptic seizures and delays in the subject’s development. In other cases, these first signs result in cutaneous tasks or in the identification of a cardiac tumor.

Following this first diagnosis, additional tests are essential to validate or not the diagnosis. These include:
– a brain scan;
– MRI (Magnetic Resonance Imaging) of the brain;
– an ultrasound of the heart, liver and kidneys.

Currently, there is no cure for the disease. The associated treatments are therefore independent of the symptoms that each individual presents.

Generally, antiepileptic drugs are administered to limit epileptic seizures. In addition, drugs for the treatment of tumor cells of the brain and kidneys are also prescribed. In the context of behavioral problems, a specific treatment of the child is necessary.

Treatment of the disease is usually long-term.