The uterine fibroids are benign (noncancerous) on the wall of the uterus, in isolation or in groups.

Also known as myomas, meiomyomas or uterine fibroids , fibroids usually appear in women after the age of 30 years. They can vary in size from pea to grapefruit or more.

In the majority of cases, fibroids do not cause any symptoms. However, they can sometimes be very troublesome and cause heavy menstrual bleeding, all kinds of pain and frequent urges to urinate. In addition, fibroids sometimes cause fertility problems.

The uterine fibroids are the most common non-cancerous tumor in women of reproductive age. It is estimated that between 20% and 40% of Caucasian women and up to 50% of African-American women over 35 have uterine fibroids. After age 50, this proportion rises to 70% among Caucasian women and 80% among those of African origin. However, more than half of these fibroids do not cause any symptoms , so it is difficult to estimate their exact prevalence.

There are 3 types of uterine fibroids, depending on their location (see diagram at the top of the sheet).

The cause of fibroids is poorly known. Their existence is probably the result of a set of genetic, hormonal and environmental factors.

It seems that the fibroid originates from a single cell of the uterine wall that undergoes a genetic mutation and begins to multiply uncontrollably. Subsequently, estrogen (female hormones) act on this fibroid and stimulate its growth.

Heredity also seems to play a big role. If a mother has had a fibroid, her daughter is more likely to have some. The natural evolution of most uterine fibroids is the increase in volume. High levels of estrogen in the body accelerate the growth of fibroids. Being pregnant, taking oral contraceptives or taking hormone therapy increases the presence of estrogen in the body. Paradoxically, clinical studies have shown that fibroids do not increase during pregnancy. However, 2% to 4% of pregnant women have a fibroma that is revealed during pregnancy.

As for the use of oral contraceptives (combination of estrogens and progestins), the studies are contradictory, but most show that contraceptives slow down the growth of fibroids, especially when they formed early in adolescence.

In early perimenopause , the estrogen level is usually higher, which often triggers fibroids growth a few years before menopause. After menopause, fibroids progressively decline due to declining estrogen production and, if not too large, eventually disappear. Hormonal replacement therapy after menopause rarely leads to slight growth of fibroids. Indeed, the doses of estrogen contained in these replacement hormones are very low.

Most uterine fibroids go unnoticed and have no health consequences. But in some cases, complicationscan be associated with it and result in:

About 30% of uterine fibroids cause symptoms. These vary according to the size of fibroids, their type, number and location.

People at risk for Uterine fibroid

All women of childbearing potential have a risk of uterine fibroids. This risk is particularly increased in the following women: 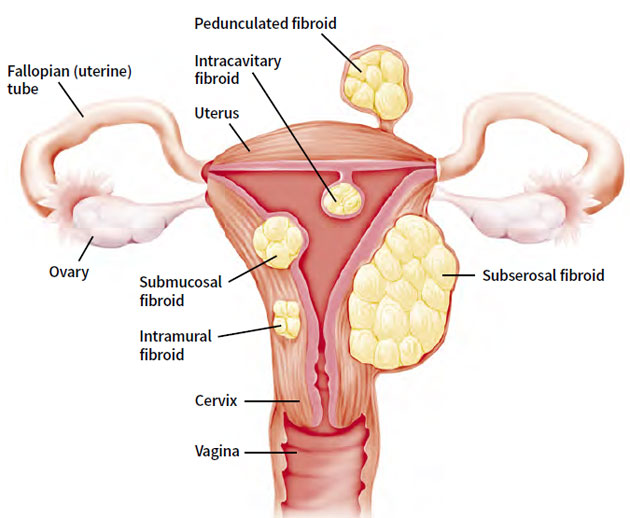 When treatment is needed, the decision to choose one over another depends on a variety of factors: the severity of the symptoms, whether or not to have children, age, personal preferences, etc. Only the hysterectomy , that is to say the removal of the uterus, offers a definitive solution.

Medications affect the  regulation of the menstrual cycle  to reduce symptoms (including heavy menstrual bleeding), but they do not reduce the size of the fibroid.

Three solutions are available to women who have troublesome fibroids:

– the IUD (Mirena). It can be implanted in the uterus only if the fibroid is not submucous (against formal indication) and the fibroids are not too big. This IUD gradually releases a progestogen that causes a significant decrease in bleeding. It must be replaced every five years.
– Tranexamic acid (Exacyl) can be prescribed for the duration of bleeding.
– mefenamic acid (Ponstyl), an anti-inflammatory drug may be prescribed during bleeding.

In cases of large fibroids or severe haemorrhage, other hormonal drugs may be prescribed to reduce the size of the fibroid before surgery. Iron supplementation may be prescribed for women with severe bleeding to compensate for iron loss in their body.

Pre-surgical treatment of uterine fibroids.
Analogues of Gn-RH (gonadorelin or gonadotropin releasing hormone). GnRH (Lupron, Zoladex, Synarel, Decapeptyl) is a hormone that reduces estrogen levels to the same level as a postmenopausal woman. Therefore, this treatment can decrease fibroids size from 30% to 90%. This medication causes temporary menopause and is accompanied by symptoms, such as hot flashes and decreased bone density. Its side effects are numerous, which limits its long-term use. Gn-RH is therefore prescribed in the short term (less than six months) while waiting for surgery. The doctor sometimes adds tibolone (Livial) to the Gn-RH analogues.

– Danazol (Danatrol, Cyclomen). This drug inhibits the production of estrogen by the ovaries, which normally interrupts menstrual cycles. It can help reduce bleeding, but its side effects are painful: weight gain, hot flashes, increased cholesterol, acne, excessive hair … It is effective over 3 months, to reduce the symptoms of fibroids, but no study has evaluated its effectiveness over longer. It appears to have more side effects and less efficacy than GnRH analogues. It is therefore no longer recommended

The surgical procedure is mainly indicated in cases of uncontrollable bleeding, infertility, severe abdominal pain or in the lower back.

The  myomectomy  involves removing the fibroid. It allows the woman who wants to have children. You should know that myomectomy is not always a definitive solution. In 15% of cases, other fibroids appear and in 10% of cases, it will take further surgery 6 .

When fibroids are small and submucosal, myomectomy can be performed by hysteroscopy. Hysteroscopy  is done using an instrument with a small lamp and a video camera that the surgeon inserts into the uterus through the vagina and cervix. The images projected on the screen then guide the surgeon. Another technique, laparoscopy allows to insert the surgical instrument by a small incision made in the lower abdomen. In cases where the fibroid is not accessible to these techniques, the surgeon performs a laparotomy, a classic opening of the abdominal wall. The Embolization of fibroids is a endochirurgicale technique to dry the fibroids without removing them. The doctor (an interventional radiologist) installs a catheter in an artery that irrigates the uterus to inject synthetic microparticles that block the artery that irrigates the fibroid. The fibroid, which no longer receives oxygen or nutrients, gradually loses about 50% of its volume.

In addition to preserving the uterus, this procedure is less painful than myomectomy. Convalescence of seven to ten days is sufficient. For comparison, a hysterectomy requires at least six weeks of convalescence. According to a study published in 2010, uterine artery embolization (UAE) offers comparable results to five years compared to hysterectomy, by preserving the uterus. However, this technique can not be used for all fibroids. For example, it is not recommended for treating submucosal fibroids.

A method called ligation of the uterine arteries is also feasible by laparoscopy. It consists of putting clips on the arteries. But it seems less effective than embolization over time.

– Removal of the endometrium (the lining of the uterus) may, in some cases, be suitable for women who do not want more children to reduce heavy bleeding. When the endometrium is removed by surgery, menstrual bleeding usually disappears, but it is no longer possible to become pregnant. This surgery is mainly performed in cases of heavy bleeding and numerous small and submucous fibroids.

– Hysterectomy, or removal of the uterus, is reserved for the heaviest cases where the previous techniques are impossible, and for women who no longer wish to have children. It can be partial (preservation of the cervix) or complete. Hysterectomy can be performed abdominally, through an incision made in the lower abdomen, or vaginally, without any abdominal opening is performed, or laparoscopically when the size of the fibroid allows. It is the “radical” solution against fibroids, since there can be no recurrence after removal of the uterus.