Vasculitis is inflammation of the vessel walls leading to an alteration of the vascular wall. They are still called vasculitis or angiitis.

Vasculitis is distinguished from large, medium and small vessels:

The cause of Horton’s disease is poorly known, reaching exclusively people over 60 years including the external carotid artery: it is responsible for many ischemic phenomena in the face, including an anomaly of the temporal arteries, mandibular claudication, necrosis of the face (tongue and lips) or scalp, headache, pain, and hypersensitivity of the scalp. Ophthalmological signs can be serious (visual acuity, oculomotor palsy, ptosis, pupillary abnormality) and lead to blindness by generally irreversible ischemic optic neuritis.

The clinical signs are often not very evocative; the attention is generally attracted by a very important inflammatory syndrome (sedimentation rate higher than 80 mm at the 1st hour) and disruption of the proteins of the inflammation in the blood.

The diagnosis is confirmed by histopathological examination under the microscope of an arterial fragment, most often the superficial temporal artery with a size of at least 3 cm.

Oral corticosteroid therapy is the standard treatment for Horton’s disease. 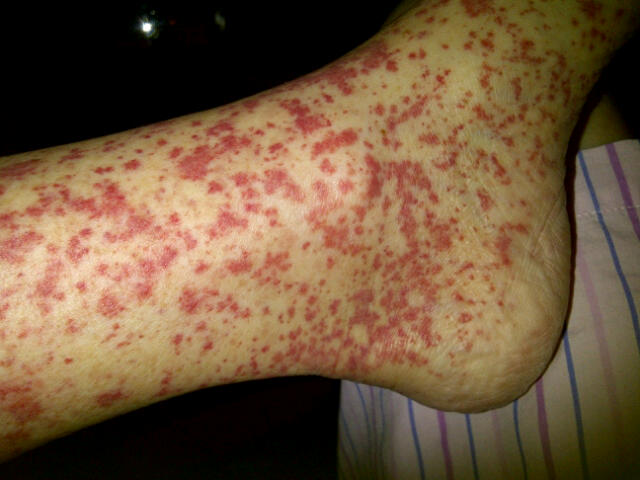 Takayasu’s disease or “disease of women without a pulse” is of unknown origin, affecting the aorta, its branches (coronary arteries, carotid, subclavian, vertebral, renal, and iliac) as well as pulmonary arteries. Where his name “aortic arch syndrome”.

This rare disease especially affects the young woman between 20 and 35 years. It is found more frequently in Asia.

The pre-occlusive period is characterized by the appearance of general unspecific signs (fever, joint pain, deterioration of the general state, slimming …).

Sometimes there are pains in the eye, vision problems, and erythema nodosum

Then there is neck pain along the course of the carotid artery (carotinodynia) more suggestive of the disease, pain of the upper limbs, weakness or a more pronounced fatigability from one side to the other.

At the occlusive period, the arteries become narrowed (stenoses) or occluded. It can be noticed incidentally when taking the different blood pressure between the 2 arms or absence of a pulse in places.

The treatment is based on steroids for one to two years, sometimes combined with immunosuppressive therapy (methotrexate, azathioprine, mycophenolate mofetil).

In case of resistance to treatment, biotherapies may be tried: anti-TNF (Tumor Necrosis Factor) (infliximab) or anti-receptor interleukin 6 (tocilizumab)

Vascularity of the vessels means

Periarteritis nodosa (PAN) is a very rare necrotizing vasculitis that can affect many organs, whose cause is poorly known (some forms are linked to the hepatitis B virus).

Patients often have an alteration of the general state with weight loss, fever…

Muscle pain is present in half of the cases. They are intense, diffuse, spontaneous or triggered by pressure, which can nail the patient to bed due to the intensity of pain and muscle wasting…

Vasculitis can also affect the brain more rarely, which can lead to epilepsy, hemiplegia, stroke, ischemia or hemorrhage.

The evocative sign on the cutaneous plane is the purpura (purplish spots which do not fade when pressed on), curved and infiltrated, especially in the lower limbs or livedo, forming sorts of meshes (livedo reticularis) or mottles (livedo racemosa) purplish on the legs. We can also see a Raynaud phenomenon (some fingers whiten cold), even gangrenes of finger or toe.

Orchitis (inflammation of a testicle) is one of the most typical manifestations of PAN, due to a vasculitis of the testicular artery that can lead to testicular necrosis.

A biological inflammatory syndrome is present in the majority of patients with PAN (increased sedimentation rate to more than 60 mm in the first hour, C-reactive Protein …), a major eosinophilia (increased white blood cells) eosinophilic polynuclear cells).

The treatment of PAN begins with corticosteroid therapy, sometimes associated with immunosuppressants (cyclophosphamide in particular)

Biotherapies take place in the management of PAN, including rituximab (anti-CD20).

Buerger’s disease or thromboangiitis obliterans is a vasculitis involving segments of small and medium-sized arteries and veins of the lower and upper limbs, causing thrombosis and recanalization of affected vessels. This disease is more common in Asia and among Ashkenazi Jews.

It occurs in a young patient (age under 45 years), often smoker, who begins to show manifestations of arteritis early in life (ischemia of fingers or toes, intermittent claudication, ischemic arterial ulcers or gangrenous legs …)

Treatment involves the total cessation of smoking which is a triggering an aggravating factor of the disease.

The doctor prescribes vasodilators and antiplatelet agents such as aspirin

It is possible to have to resort to revascularization surgery.

Kawasaki disease or “adenocutaneous-mucous membrane syndrome” is a vasculitis affecting the territory of the coronary arteries, responsible in particular for coronary aneurysms which can be a source of mortality, especially in children between 6 months and 5 years old with a peak frequency at the age of 18 months.

The disease takes place in three phases over several weeks

Acute phase (lasting 7 to 14 days): fever with rash and appearance of “cherry lips”, “strawberry tongue”, “eyes injected” by bilateral conjunctivitis, “inconsolable child”, edema and redness of hands and feet. Ideally, treatment should be implemented at this stage to limit the risk of cardiac sequelae

Subacute phase (14 to 28 days) resulting in desquamation of the pulp of the fingers and toes begin around the nails. It is at this stage that coronary aneurysms are formed

Convalescent-phase, in principle without symptoms, but during which sudden cardiac complications may occur due to the formation of coronary aneurysms in the previous phase.

Significant inflammation is observed in the blood with a sedimentation rate greater than 100 mm in the first hour and a very high C-reactive protein, a clear increase of polynuclear leukocytes greater than 20 000 elements / mm3, and an increase in platelets.

The treatment is based on immunoglobulins injected intravenously (Ig IV) as soon as possible to limit the risk of a coronary aneurysm. In the absence of IVIG efficacy, doctors use intravenous cortisone or aspirin.

It is a large group of vasculitis of the arterioles, venules or capillaries whose prognosis is very variable depending on whether it is pure or systemic cutaneous vasculitis.

The most common clinical aspect is purpura (purplish spots that do not fade when pressed), bulging and infiltrated, especially in the lower limbs, aggravated by the standing position, which can take many forms (petechial and ecchymotic, necrotic , pustular …) or livedo, forming sort of mesh (livedo reticularis) or mottled (livedo racemosa) purplish on the legs. We can also see a phenomenon Raynaud (a few fingers whiten cold).

Purpura and livedo may be associated with other lesions on the skin (papules, nodules, necrotic lesions, hemorrhagic bubbles), fixed urticaria that does not itch.

The presence of manifestations outside the skin is a factor of gravity, showing the presence of vascular involvement in the organs:

The doctor prescribes examinations which aim to search for a cause and signs of gravity: blood test with counting of the blood cells, search of inflammation, liver and renal evaluation …, search of blood in the saddles and X-rays in function of the points of call (radio of lungs in case of breathing difficulties …).

Micropolyangéite (MPA) is a systemic necrotizing vasculitis whose clinical signs are very close to those of PAN.

MPA is associated with ANMA anti-myeloperoxidase (anti-MPO) and classically gives a rapidly progressive glomerulonephritis and pulmonary involvement that is absent in PAN.

The treatment of MPA as for PAN starts with corticosteroid therapy, sometimes associated with immunosuppressants (cyclophosphamide in particular)

Wegener granulomatosis is a vasculitis whose onset is usually marked by ENT or respiratory symptoms (sinusitis, pneumopathy …) resistant to antibiotic treatments

The management of Wegener’s granulomatosis, which can sometimes be considered a medical emergency, should be carried out in a specialized hospital setting, by a combination of cortisone and oral cyclophosphamide.

Disease of Churg and Strauss

Asthma is a major and early criterion of this vasculitis, which proceeds on average 8 years before the first signs of vasculitis (neuropathy, sinus disorders …) and persists afterward.

Treatment of Churg and Strauss disease begins with corticosteroid therapy, sometimes associated with immunosuppressants (including cyclophosphamide)