The in vitro fertilization or IVF is a technique assisted reproduction that involves making fertilization, that is to say a meeting of sperm and egg in the lab, in vitro, therefore outside the body of the woman.

In vitro fertilization is a technique used by couples who want to have a child who is facing a problem of infertility .

The sperm of the man are put in the presence of the egg of the woman outside his body, in the laboratory, then the embryo is re-implanted in the uterus of the future mother.

Medically assisted procreation (AMR) brings together a range of methods used to help a couple to have a child: artificial insemination, stimulation of ovulations, in vitro fertilization … These techniques is practiced by specialized gynecologist doctors and trained to these methods in a clinic or hospital.

Approximately 330,000 couples suffer from infertility in Canada, between 10% and 15% of adults of childbearing age (Data from the Association of Obstetricians and Gynecologists of Quebec)
In France, nearly one in six couples would have infertility .

When to use in vitro fertilization?

When a couple fails to conceive a child, the first step is to consult a doctor who can  assess the fertility of the man and the woman . After a health assessment  and a  physical examination , a series of diagnostic tests can be performed.

Whenever possible, the doctor first looks after the infertility of the woman or man to enable them to recover their natural fertility.

When it is not possible to treat infertility, and where possible, simple methods are used to initiate pregnancy: stimulation of ovulation (prescription of drugs that trigger ovulation) or artificial insemination for example.
In vitro fertilization is only offered to couples who cannot benefit from simpler methods or for whom the simpler methods of medically assisted treatment or procreation have failed.

In vitro fertilization is the gold standard treatment for women or men diagnosed with:

When treatments have failed, IVF is also offered for cases:

In vitro fertilization can also be performed for couples with a genetic abnormality that can lead to serious disease, so that they can choose a free embryo. In vitro fertilization can be used by a couple who cannot conceive without an oocyte donation or an embryo donation.

In France as in Belgium, IVF is covered by the Health Insurance or Health Insurance until the 43 years of a woman. After 40 years, only 4 to 5% of attempts result in a birth. The quality and the drop in the number of oocytes are involved. 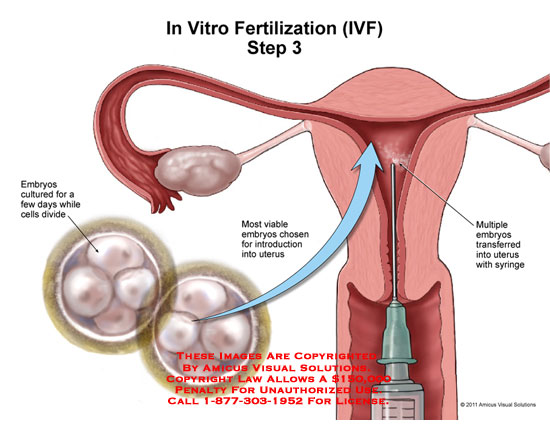 The stages of in vitro fertilization (IVF)

The in vitro fertilization treatment program requires many appointments with specialists, who prepare the couple for the technique. The couple should be informed about complex steps such as hormone injections , risks and side effects , as well as the wait times required. The treatments are expensive.

In Quebec , since 2010, the Régie de l’Assurance Maladie (RAMQ) introduced the AHR Québec program that offers free addressing a full range of infertility services, including the costs of three stimulated cycles.
In France , 4 in vitro fertilization trials are entirely covered by the Health Insurance.

1. Stimulation of the ovaries

The first step is to give the woman a hormonal treatment, usually a GnRH ( Gonadotropin Releasing Hormone ) agonist to rest the ovaries ( see the drug section ), eg Decapeptyl, Suprefact, Enantone Synarel , or Lupron.

Thereafter, the treatment aims to increase the number of follicles produced by the ovaries and to control the timing of ovulation. The woman should receive injections of gonadotropins with FSH or LH activity to stimulate the follicles to mature and allow them to produce several oocytes. These include Puregon, Gonal F, Fostimon Metrodin-HP, Bravelle, Humegon Menopur Merional Repronex Fertinex Fertinorm, Humegon Menopur Merional Repronex Fertinex Fertinorm, Elonva, Luvéris …

Pelvic ultrasound and blood tests are performed at each step to assess follicle growth. 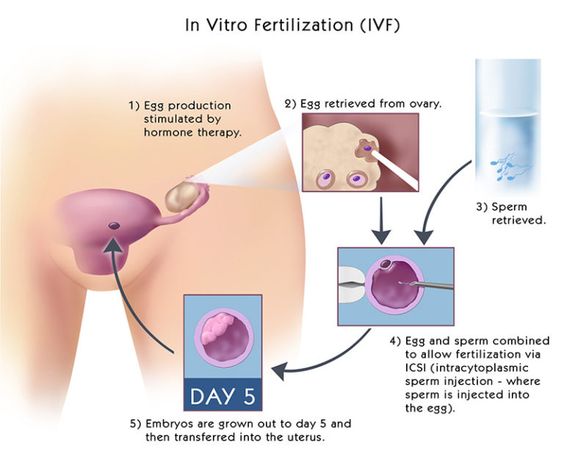 The woman’s ovaries usually produce and release a single mature egg per cycle . Although this is sufficient for normal conception, for successful in vitro fertilization, ideally more mature eggs should be obtained. It is therefore necessary to stimulate the ovarian activity of the patient more than usual. The drugs administered during an in vitro fertilization treatment cause the development of several ovarian follicles , thus increasing the possible number of eggs, thus the chances of obtaining an implantable embryo.

After 32 to 36 hours of hormonal stimulation, the mature oocytes are removed using a small tube and a needle that is introduced into the vagina. This procedure is performed under local or general anesthesia with ultrasound control because it can be very painful. The oocytes are then selected in the laboratory.

The sperm is taken a few hours earlier (or thawed the same day), and the sperm are separated from the seminal fluid and stored at 37 ° C.

A few hours after harvesting, the spermatozoa and oocytes are brought into contact in a culture liquid for several hours at body temperature. The motile spermatozoa come spontaneously, without external help, in contact with the oocyte. But only one sperm will fertilize this one. In general, on average, 50% of oocytes are fertilized .

Fertilized oocytes (or zygotes) begin to multiply. In 24 hours, the zygotes become embryos of 2 to 4 cells.

Two to five days after fertilization, one or two embryos are transferred to the woman’s uterus. Embryo transfer is a simple, painless procedure performed by means of a thin, flexible catheter introduced vaginally into the uterus. The embryo is deposited inside the uterus and develops there until its implantation.

After this stage, the woman can usually resume her normal activities.

One or more embryos (called supernumeraries) may also be preserved by freezing for subsequent trials.

Thereafter, the doctor can give hormonal medical treatment, and of course orders to do pregnancy tests to see if IVF has been effective.

Several cycles of treatment are sometimes necessary before the pregnancy succeeds. And unfortunately, some couples do not put in pregnancy despite several tests.

In vitro fertilization by microinjection – ICSI

In some cases, instead of simple invitro fertilization, the doctor recommends an ICSI (intracytoplasmic sperm injection or intracytoplasmic injection of sperm): a single sperm is injected directly into each of the mature eggs using a microscopic needle ( hence its name: Intracytoplasmic Sperm Injection ).

This method is used for men whose sperm is of poor quality, because it allows to choose a spermatozoid of the best possible quality. It is also sometimes used when several attempts at classical IVF have failed.

The IMSI is an ICSI in which an even more powerful microscope is used to select the fertilizing sperm with greater finesse (it grows 6000 times instead of 400 times for the ICSI). It is hoped to achieve better results in men with many poor quality sperm.

Sperm sampling in the epididymis or testes (PESA, MESA or TESA or TESE).

Some men have no sperm in the sperm, or no sperm. It is sometimes possible to take sperm at their source, in the testes or epididymides.
Spermatozoa are collected directly from the epididymis (PESA, Percutaneous Epididymal Sperm Aspiration ), MESA (microsurgical epididymal sperm aspiration), or in the testes (TESE, Testicular sperm extraction ) or TESE (testicular sperm aspiration), under local anesthesia .
The spermatozoa are then collected and treated, the best of them being used for IVF with ISCI or IMSI microinjection. 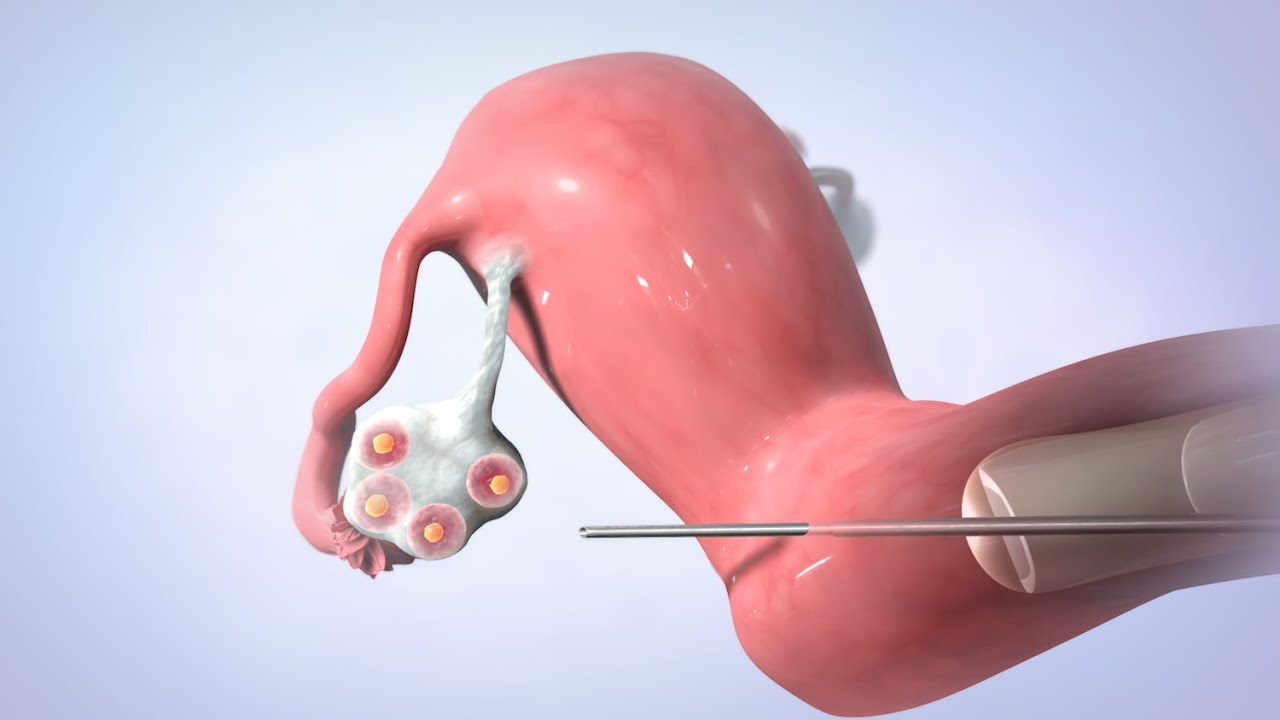 What are the risks and side effects of in vitro fertilization (IVF)?

Adverse effects of in vitro fertilization:

During treatment, some side effects such as hot flushes , abdominal pain , or bleeding are quite common but are transient and usually without consequences for the mother or fetus.

In about 5% of cases, the IVF cycle may be canceled due to a poor response to ovarian stimulation . This problem appears after the stage of triggering the egg maturation process. Other therapeutic solutions are then considered with the help of the specialist doctor.

In 1 to 3% of cases treated, there may be an abnormal increase in the size of the ovaries in the days following egg retrieval. This syndrome is caused by the injection of FSH ( Follicle Stimulating Hormone ) or HCG ( Human Chorionic Gonadotrophin ) during the stimulation phase of the ovaries. Ovarian hyperstimulation may be accompanied by:

About 25% of women using IVF give birth to twins . Fertility clinics do not usually implant more than one or two embryos each cycle, reducing the risk of multiple pregnancies.

Women who have had in vitro fertilization have a 30% increased risk of ovarian cancer (10). In one study, there were 15 ovarian cancers per 10,000 women compared to 11 out of 10,000 in women who had not done IVF. It is not known if it is due to treatments (stimulation of ovulations), or to health problems causes of infertility.

In vitro fertilization does not produce a higher than normal rate of miscarriage .