The Zika virus is a flavivirus virus, a family of viruses that also includes the dengue virus, yellow fever, West Nile … etc. It is also said that these viruses are arboviruses (short for ar thropod- Bo rn virus es) because they have the particularity of being transmitted by arthropods, insects sucking blood like mosquitoes.

The Zika virus was identified as early as 1947 in Uganda in Rhesus monkeys, then in humans in 1952 in Uganda and Tanzania. So far, Zika virus cases have been mostly episodic in South America, but epidemic outbreaks have been reported in Africa, America, Asia and the Pacific.

The current epidemic began in Brazil, currently the most affected country, and spread too many territories in South America and the Caribbean, including the French West Indies and Guyana. Epidemiological data on the extent of the epidemic are changing rapidly, and are regularly updated at WHO or INVS sites. In metropolitan France, about twenty people affected by the Zika virus have been confirmed among travelers returning from infected areas.

What are the causes of the disease, the mode of transmission of the Zika virus?

Zika virus is transmitted to humans through the bite of an infected mosquito of the genus Aedes that can also transmit dengue, chikungunya and yellow fever. Two mosquitoes of the Aedesfamily are able to transmit Zika virus, Aedes aegypti in tropical or subtropical zone, and Aedes albopictus (tiger mosquito) in more temperate zones.

The mosquito (only the female stings) contaminates itself by pricking an already infected person and can transmit the virus by pricking another person. Once in the body, the virus multiplies and persists for 3 to 10 days. The person infected with Zika is not contagious to another human being (except perhaps sexually), but can infect another Aedes mosquito if it is stung again.

Due to the internationalization of transport, the mosquito of the genus Aedes can be transported involuntarily from one place to another. The epidemic is spreading more rapidly in urban centers, with the risk of major epidemics in metropolitan areas where conditions allow mosquitoes to survive. In metropolitan France, the cases reported concerned people returning from epidemic areas, but the risk of mosquitoes becoming contaminated by pricking infected persons cannot be ruled out.

Exceptionally, the transmission could be sexual, a recent case in the US having confirmed the suspicions rose by two previous observations. It is not yet known if the virus is likely to persist in the sperm of infected men after their recovery or how long.

What are the symptoms of Zika virus disease?

The manifestations are usually quite ordinary and similar to other viral infections, with moderate fever, rash with or without itching, conjunctivitis, muscle and joint pain, fatigue, headaches. These signs occur within 3 to 12 days after sting; in the great majority of cases they are benign, and disappear in 2 to 7 days. It is estimated that 70% and 80% of Zika virus attacks do not give rise to any symptoms and go completely unnoticed.

People living in an epidemic area or who have returned from a dozen days and have at least two of these signs should consult their doctor, especially if it is a pregnant woman. 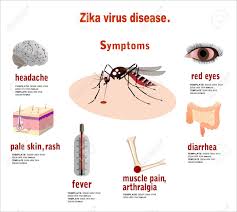 How is the diagnosis made?

The diagnosis is made either by isolating the virus in a blood or urine sample, or by looking for antibodies directed against this virus. In the presence of clinical signs, if the virus could not be identified, a serological examination (search for anti-zika antibodies) is requested. In France, only the National Reference Center for Arboviroses in Marseille is capable of performing the detection of antibodies specific for Zika virus.

What is the evolution of the disease? Its complications?

The majority of cases of Zika (80%) do not cause any symptoms, and when they occur they are mostly mild and disappear within a few days. No deaths have been observed so far.

Nevertheless, previous epidemics have shown that the Zika virus can lead to neurological disorders such as Guillain-Barré syndrome, affecting the peripheral nerves responsible for muscle weakness and tingling in the arms and legs. It is cured in most cases although some weakness may persist in some people. It gives exceptionally serious complications when it reaches the respiratory muscles and then requires hospitalization. Even in severe forms, no deaths have been observed either.

The main fear associated with the Zika virus is the risk of microcephaly affecting the children of women infected during pregnancy. Microcephaly is defined as a significant decrease in the size of the child’s head and is associated with abnormal brain development during intrauterine life or infancy. The link between microcephaly and Zika is not yet fully explained.

What treatments for Zika virus disease?

There is no specific treatment for the disease.

The Zika virus disease is usually benign, and whatever the age, the treatment comes down to rest, to a good hydration and to the taking of painkillers if necessary. Paracetamol (acetaminophen) is preferred, anti-inflammatory drugs have no indication in this case and aspirin is contraindicated, the possible coexistence with the dengue virus exposes the risk of bleeding.

Can we prevent the disease?

– There is no vaccine against the disease

– The best prevention is to protect you from mosquito bites, individually and collectively.

The number of mosquitoes and their larvae must be reduced by emptying all containers containing water. Health authorities can spray insecticides.

At the individual level, it is essential for residents and travelers to protect themselves against mosquito bites, a protection all the more stringent for pregnant women.
– People with signs of Zika will also need to protect themselves against mosquito bites to avoid contaminating other mosquitoes and therefore spread the virus.

In France, the Ministry of Health recommends that pregnant women avoid visiting an area affected by the epidemic.

– US, British and Irish authorities, because of the possible possibility of sexual transmission, advise men returning from an epidemic zone to use a condom before sex. The CNGOF (National Professional Council of French Obstetric Gynecology) also recommends wearing a condom among companions of pregnant or childbearing women living in the affected area or when the companion is potentially infected with Zika.
– The Biomedicine Agency has requested to postpone sperm donation and procreation medical assistance (MPA) in the departments of Guadeloupe, Martinique and Guyana as well as in the month following the return of a stay in an epidemic zone.
Many questions remain to be solved about this virus, such as the incubation period, the duration of persistence in the organism, and research continues on possible treatments and vaccines, as well as the setting up of more diagnostic tests. Specific. This means that data can quickly evolve on this subject still unknown to the general public there is little.