Tendinitis is the inflammation of a tendon or its sheath, the tendons being a kind of “ropes” made of collagenous fibers that attach the muscles to the bones. Tendinitis mainly results in pain, sometimes accompanied by swelling in the affected tendon. It is a musculoskeletal disorder (MSD).

Note: The term tendonitis is gradually being replaced in the medical community by the term tendinopathy, which more generally refers to tendon disease. Indeed, in many cases (especially cases of chronic tendinitis), what is known as tendonitis is not properly an inflammation, but rather a deterioration or degeneration of the tendon.

All tendons may be the site of tendonitis, but the most common tendinitis is:

Tendinitis is more common among athletes, whether professional or amateur, and people whose profession requires repetitive actions.

Causes of the Tendinitis

Several elements may cause tendinopathy or tendinitis. Most often, the pain gradually sets in because of the repetition of a movement or excessive tendon strain.

Thus, most often, tendinitis is linked:

Some inflammatory rheumatism, such as spondyloarthropathy or rheumatoid arthritis, can also cause inflammation of a tendon.

Finally, the use of drugs, including fluoroquinolones and anabolic steroids (which can cause a rupture of tendon), can also be involved in some cases.

Most of the time, tendinitis is treated well with rest (stop triggering activity) and rehabilitation.

However, if the injured tendon is not resting, the fibers may take a long time to repair, lose flexibility and elasticity. In addition, the tendon can rupture (tendon rupture) if it is too damaged or under the impact of a shock or a force too violent, which requires a surgical operation.

The main symptoms of tendonitis are:

If tendinitis is not supported, the pain worsens, lasting even after exercise and limiting functional abilities.

Pain often persists for weeks to months, especially if tendonitis is not adequately managed. This is called chronic tendonitis.

People at risk for Tendinitis

People most at risk of tendinitis are:

Factors that may increase the risk of tendinitis3 include: 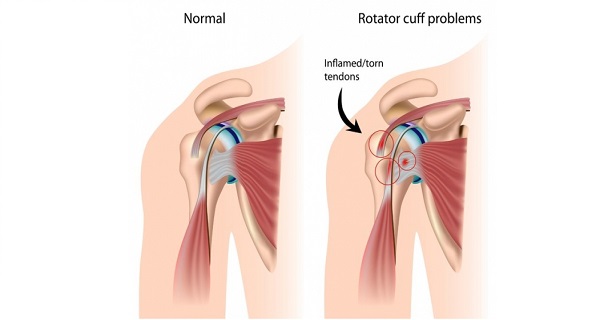 The treatment aims to remove the pain and identify the cause of tendonitis to prevent it from reappearing during the resumption of activities.

In most cases, tendinitis can be effectively managed by combining rest, pain medication and rehabilitation. But it often happens that the cure is long.

This is the first stage of treatment. It begins with a resting of the tendon and the application of ice, according to the protocol “GREC”: ice – rest – elevation – contention:

To relieve pain, taking paracetamol (acetaminophen) is recommended, without exceeding the maximum dose of 4 g / day.

Administration of no steroidal anti-inflammatory drugs (NSAIDs), such as ibuprofen, may be recommended for acute pain. However, it is increasingly questioned in the treatment of chronic tendonitis because they are often not associated with inflammation. In chronic tendinopathy, it could even be that NSAIDs have a deleterious effect on the healing of the tendon.

When application of ice and adequate tendon rest has not been successful in the treatment of acute tendonitis, corticosteroid infiltrations may relieve pain and reduce inflammation. However, they could increase the risk of partial or complete rupture of the tendon (notably by preventing the person from feeling the pain and thus letting it “force”).

In the acute phase, the application of an NSAID cream or gel may be preferable to oral NSAIDs because it can relieve pain without causing side effects.

Rehabilitation in physiotherapy (or physiotherapy) is essential to prevent recurrence, promote healing of the tendon and allow the resumption of sports practice.

Results and indications vary depending on the affected tendon.

Shock waves are acoustic waves that act by “striking” the tendon fibers. They are increasingly used to treat chronic tendinopathy and several Meta-analyze have shown their effectiveness.

Although the mode of action of shock waves is not fully understood, it is thought that they relieve pain by stimulating local blood circulation and repairing damaged fibers.

Ultrasound is often used for their analgesic properties but no study has really demonstrated their effectiveness, except perhaps on certain tendinitis accompanied by calcifications.