A thrombosis is a blood clot known as thrombus forming in a blood vessel and obstructing. The clot can form in a vein or an artery. We then speak respectively of venous thrombosis (or phlebitis) and arterial thrombosis. The most serious complication of venous thrombosis is pulmonary embolism, where the clot detaches itself from the place where it has formed and migrates to the pulmonary artery, which can lead to sudden death. The complications of arterial thrombosis are myocardial infarction (heart attack), stroke.or other vascular accidents such as lower limbs or bowel. There are several treatments to prevent the formation of thrombi or dissolve. 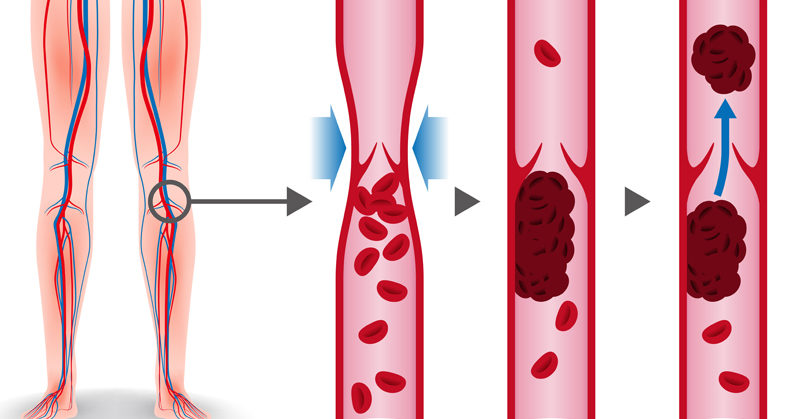 Thrombosis is the obstruction of a vein or artery by a thrombus (or clot). There are two types of thrombosis:

There are many factors that can lead to thrombosis.

Arterial thrombosis:
It can be triggered by a lesion of the wall of an artery resulting in the formation of a clot in contact with the damaged artery area. This is what happens in atherosclerosis often involved in infarctions or stroke. In question, toxic substances either for the wall of the arteries, or for the coagulation of blood: tobacco, hormonal design…

Venous thrombosis:
It can be triggered by the injection of a drug intravenously, trauma, inflammation, bacterial infection, varicose veins, cancer, oral contraceptive…. On the other hand, a period of slow movement in a repeated and prolonged sitting position (long flight), injury, long immobilization (plaster) or surgery – these are common causes. .

Venous thrombosis in the lower limb is essentially characterized by the following clinical manifestations:

In about one in two cases, deep vein thrombosis causes no sign.

In case of arterial thrombosis, one can observe according to the localization of the clot, very diverse signs:
– A clot in a cerebral artery causes symptoms of stroke very different depending on the artery affected.
– In the case of thrombosis of a coronary artery, symptoms of myocardial infarction (see link to card on the symptom page of IDM)
– In case of clot in a lower extremity artery, or acute ischemia of the lower limb, there is a sudden pain, a loss of pulse in the leg, a pallor, a coldness …
– In case of clot in the arteries irrigating the digestive tract or mesenteric ischemia, there appears a strong persistent pain in the abdomen. Mesenteric ischemia may also be due to venous thrombosis.

Populations at risk for Thrombosis

Venous thrombosis affects about 1 in 1,000 people, 3 in 1,000 people in patients over the age of 80 (mostly men). The hereditary factor is sometimes implicated in people suffering from bleeding disorders.

The treatment to be followed depends primarily on the type of thrombosis.

In case of deep vein thrombosis of the lower limbs, the basic treatment is based on the injection of anticoagulants of the heparin family every day to prevent clot extension and migration. Subsequently, other types of anticoagulants available in tablet form take over. When thrombosis causes a severe obstruction, the medical team may use fibrinolytics, drugs whose action is to dissolve the clot.

Elastic compression is essential as soon as possible. It is stockings or pantyhose compressing the veins of the legs, to wear to the maximum to avoid the complications of phlebitis. This compression must then be worn for at least 2 years after phlebitis.

In particular cases, especially in cases of recurrent phlebitis resulting in a significant risk of repeated pulmonary embolism, the installation of a cellar filter may be considered. This is a filter inserted into the vena cava, vein that drains the lower limbs. This filter aims to block the clot before it reaches the pulmonary arteries, which helps prevent pulmonary embolism sometimes very serious.

In case of arterial thrombosis, their treatment depends on the place of the thrombosis. What matters is the speed of treatment, especially for heart attacks and strokes. Indeed, the area irrigated by the clogged artery is lost or even destroyed over the hours if it is no longer irrigated. The urgency is to open the artery to preserve the ability to function, including the heart and brain. 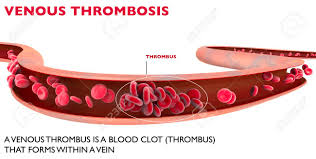 In case of infarction, the treatment is to use as quickly as possible a fibrinolytic drug to dissolve the clot that clogs an artery of the heart. Other treatments are put in place to protect the heart and avoid complications and recurrences. In case of a stroke due to arterial thrombosis, treatment also involves the use of fibrinolytics as soon as possible.

And for other thromboses, the treatment is adapted to the location of the thrombosis.

Prevention of venous thrombosis of the lower limbs (the most frequent phlebitis).

Many plants will prove effective in promoting blood circulation. It may include hanging in the form of capsules or herbal teas: red vine (leaves), horse chestnut (bark), ginkgo biloba (leaves), butcher (root). These plants can be taken over long periods.